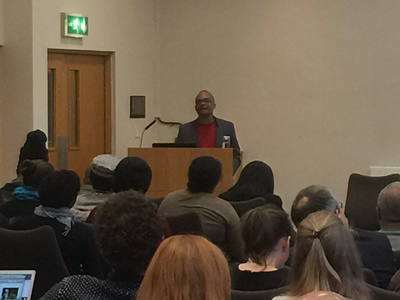 Dr. V.P. Franklin, Distinguished Professor Emeritus of History at University of California Riverside, moderates a panel discussion at the “Repairing the Past, Imagining the Future: Reparations and Beyond” interdisciplinary conference taking place this week at the University of Edinburgh.

EDINBURGH, U.K. — Several dozen academics, activists and former political leaders from across the globe traveled to Western Europe this week to take up the controversial issue of reparations for the descendants of enslaved African people.

Sponsored by professors at the University of Edinburgh and Wheelock College in Boston, the three-day interdisciplinary conference focused on the legal and moral imperative for reparations, as scholars and activists discussed the groundwork being laid for campaigns being waged to pressure countries around the world to take responsibility for the harm that was done as a result of the Atlantic Slave trade.

While reparations has been considered a fringe issue for some, it’s not a new topic in the ongoing dialogue about racial justice. According to scholars, as far back as the 1700s, enslaved African people were calling for reparations for themselves and their ancestors. The controversial issue was revived in the United States last year thanks to Ta-Nehisi Coates’ 15,000-word article that appeared in The Atlantic titled “The Case for Reparations.” An 1865 letter by an ex-slave named Jourdan Anderson to his master gained traction when it went viral last year and was published in several U.S. news outlets. In addition, well-known scholars like Dr. Mary Frances Berry, a historian at the University of Pennsylvania, and Charles Ogletree, a law professor at Harvard University, are fierce supporters of the movement.

But in other parts of the world, such as the Caribbean, the fight for reparations has been steady and ongoing for decades. For example, in 2013 Caribbean heads of governments established the Caricom Reparations Commission [CRC] with a mandate to prepare the case for reparatory justice for the region’s indigenous and African descendants. Caricom established a 10-point Reparations Plan that demanded, among other things, a full formal apology, the establishment of cultural institutions and a repatriation program.

“I think it’s as important to have an international perspective,” said Dr. V.P. Franklin, the Distinguished Professor Emeritus of History at the University of California, Riverside and an editor of The Journal of African American History. “What’s happening around the world should inform the movement in the U.S. We need to educate people about the reparations movement taking place around the world and make connections.”

Franklin said there is a mass effort by some scholars to push President Obama to create the Dr. John Hope Franklin Commission on Reparative Justice, which would be similar in scope to the One America Initiative that President Clinton established on race. Dr. John Hope Franklin, the preeminent historian, was selected by Clinton to chair the commission’s advisory board.

“I think the issue is experiencing a resurgence,” said Dr. Jennifer Page, a post-doctoral fellow in the Center for the Study of Slavery and Justice at Brown University. “I think people are looking at reparations.”

For Page, who has a philosophy background but researches and writes about reparations, the opportunity to meet senior academicians like Dr. Raymond A. Winbush, who has been studying and making the case for reparations for years and directs the Institute for Urban Research at Morgan State University, was well worth the overseas travel.

“As a young scholar, I have a lot to learn,” said Page. “I like the idea of being at a conference that brings activists and academics together.”

Page, who is White, is perhaps the best evidence that the reparations movement is racially diverse as well. And she was not alone. She was joined by other White professors, researchers and students—including two undergraduates from Wheelock College—who spend time thinking and writing about White privilege.

“This is a once in a lifetime opportunity,” said Jordin Diantonio-Smith, 22, a social work student at Wheelock who accompanied her former professor, Dr. Joyce Hope Scott, to the conference.

Like Diantonio-Smith, Erin Whitman, 21, also a senior at Wheelock, sees the reparations issue as an opportunity to confront race relations, a topic that her generation is sometime wary about discussing publicly.

Jean Allain, an expert in international law who teaches at Queens University in Belfast, said that the legal system can and should be used as one of many tactics to push the reparations issue forward. He said that the crime of the Atlantic Slave trade has continued to impact the descendants of slaves hundreds of years after the slave trade was officially abolished.

“The crime is deemed to continue until there is some closure,” said Allian, who writes extensively on the issue.

The solution may eventually have to come in the form of legislative remedies, said Tuneen E. Chisolm, an assistant professor at Campbell Law School in Raleigh, N.C.

“There is no need for a study at this point for why we need reparations,” she added.

Jamal Eric Watson can be reached at jwatson1@diverseeducation.com. You can follow him @jamalericwatson