At Mizzou, and Across the Country, It’s All About the Bottom Line 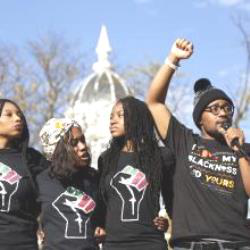 One day after a faculty leader at the University of Missouri told me tensions were down and the campus was on its way to healing following the resignation of the system president, I watched in disbelief as social media was flooded with racially driven threats against the Black students on campus.

I do not know why I was stunned. It isn’t that I thought that the removal of the president would solve all of the issues on campus ― or any of them, actually. It isn’t even that I saw the president as being the problem at Mizzou, though certainly his nonchalance towards the maltreatment of the African-American students on campus was a critical part of facilitating what has unfolded as a culture of hostility against students of color on the campus.

It isn’t that I didn’t realize there obviously was a pervasive collective thought by an unacceptable number of students that the Black students at Mizzou were somehow subhuman. And it isn’t even that I thought that the aggressors at Mizzou are representative of a small faction of radical thinkers. I’m not one of the people who is somehow delusional about the idea that we live in a postracial society.

I think it is a culmination of things, best articulated by Black Lives Matter activist Shaun King on Facebook: “2015 is not what we thought it was. The deadliest hate crime against Black folk in the past 75 years happened THIS YEAR in Charleston. More unarmed Black folk have been killed by police THIS YEAR than were lynched in any year since 1923. Never, in the history of modern America, have we seen Black students in elementary, middle, and high school handcuffed and assaulted by police IN SCHOOL like we have seen this year. Black students, who pay tuition are leaving the University of Missouri campus right now because of active death threats against their lives. If you EVER wondered who you would be or what you would do if you lived during the Civil Rights Movement, stop. You are living in that time, RIGHT NOW.”

Folks celebrated the bravery and impact of the Black football players who threatened to boycott all football-related activities until President Wolfe stepped down. And they were brave. And it was an important moment for the student-athletes, whose humanity is often denied, whose student experience is often severely truncated in favor of the focus on their being athletes.

For the group, which represents a population who, across the country, are often isolated from the broader student body in every way — from having all of their student services and advising housed in the athletics department to having such a rigid workout schedule that it disallows participation in any other extracurricular activity — it represented a pivotal moment in which their humanity as young Black men superseded the identity as athlete-only imposed upon them by everyone from youth coaches to college professors and administrators and even the NCAA.

But what few are discussing is that the resignation that many credit largely to the players’ protest was not an acknowledgement of the players’ humanity. I’d argue the complete opposite. It was a recognition of the loss of revenue the university would face if these unpaid laborers decided not to take the field. Even in the midst of the mediocre season the Tigers are having, there was too much on the line to allow the players to strike. Beyond the $1 million the University of Missouri would have owed Brigham Young for the missed game, there was the potential hit to future recruiting classes, and thus, future revenue potential. (To paraphrase the words of the same faculty leader Monday, I can’t see a university ignoring the concerns of its Black athletes and still remaining competitive as a major football program.)

I don’t want to trivialize the importance of Missouri head coach Gary Pinkel’s very public support for what the players were doing, very early. I could be a cynic and say he knew the potential future impact of not supporting them, but there are so many storied programs that have not just not supported, but discouraged and prohibited their student-athletes from participating in student protests, that it would have been par for the course. Pinkel is the same coach who supported Michael Sam’s coming out and has seemed to be generally supportive of his athletes as human beings, not just commodities.

But it does not change the fact that, while all of the major outlets are writing about how the football team took down the president, no one is acknowledging that the athletes’ fight was to acknowledge their humanity; for the institution, though, it was about an entirely different bottom line. Can you imagine if athletes at other schools had caught on and begun to protest in solidarity — or if they’d awakened to the conditions on their own campuses and protested an overall condition of injustice across the nation? Collegiate athletics are a multibillion dollar industry and no one involved could afford the financial hit that would have resulted from games being missed.