UCLA Exemplifies Ability to Forge Ahead in Fisher Era 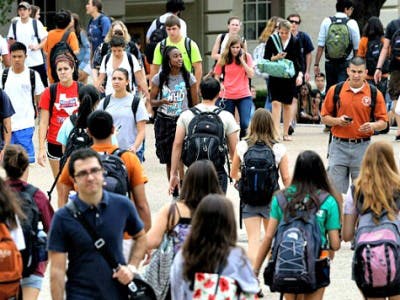 “I said, ‘Norm, what an outrage. We need to do something about it,’” says Taylor, an active UCLA alumnus and former CFO of the University of California system. “Norm said, ‘You’re right. I’m going to start a task force and you can chair it.’”

While the seeds of that task force’s efforts continue to bear fruit, UCLA officials say, its two-year run officially ended in 2008.

During its tenure, the group had been razor-focused, says Taylor, on ensuring that not only Black students were admitted to UCLA but that they also graduated. The task force formed a continuing group of Black alumni donors that has raised millions of dollars.

“At the time, two-thirds of students’ [personal] essays didn’t get read,” says Taylor, now head of the Educational Credit Management Corporation Foundation, a philanthropy funding assorted efforts, including at UCLA, to prepare students from underresourced communities and schools for college. “We changed that practice,” he adds, “and helped created a more holistic approach that was fairer to all students — not just African-Americans.”

That former task force’s achievements — and subsequent collaborative efforts with UCLA itself and a racial array of UCLA alumni — have come despite the constraints of California’s Proposition 209. Passed in 1996, that landmark state law banned race-based college admissions and race-based allocations of scholarships and other student financial aid; UCLA’s then declining number of students of color — and, by extension, decreasing diversity tallies at other California colleges — has been linked, at least partly, to 209.

That law in California — where, in 1978, Allan Bakke, a­fter being denied admission to the UC Davis School of Medicine, sued and won a U.S. Supreme Court case outlawing race-based quotas in college admissions — is one in a handful similarly taking aim against affirmative action. (The Bakke ruling did allow the use of race as a deciding factor.)

Since roughly the mid-2000s, Arizona, Florida, Georgia, Nebraska, New Hampshire and Washington have also joined what, thus far, is a short list of states whose lawmakers have constrained college admissions practices in which race had been a pivotal plus.

In 2003, the Supreme Court, in 5-4 and 6-3 votes, respectively, ruled that the University of Michigan could continue using race as one deciding factor in college admissions but struck down its practice of awarding Blacks, Latinos and Native Americans 20 extra points on an admissions rating scale.

Collectively, those legal cases form a lead-up to the Supreme Court’s pending ruling on whether the University of Texas at Austin wrongly refused to admit now 23-year-old Abigail Fisher.

Indeed, should the Supreme Court side with Fisher and bar colleges from considering applicants’ race, no one can say for sure what the future holds for hopeful college students of color nor for campus diversity, says Dr. Deborah Archer, a New York Law School professor and its dean of diversity and inclusion. She also serves as co-director of New York Law’s Impact Center for Public Interest Law.

“Over the past 10 years, there’s been an increasing acknowledgement of the importance of diversity [by educators and administrators] on more and more college campuses, medical schools, law schools. And there’s a corporate consensus that diversity is important,” she says.

Archer, who previously, as an NAACP Legal Defense and Educational Fund attorney, tried lawsuits challenging the use of affirmation action by colleges, continues: “It’s important to this society’s success, to its ability to compete in the global marketplace … for us to be able to have conversations across lines of race and ethnicity and to understand folks who are different than we are. For most people, that conversation doesn’t [take place] until they get to college … We’ve been aggressive in pursuing that level of needed diversity. But the Supreme Court, more and more, has been tying our hands.”

Abigail Fisher’s lawyers — they want the nation’s highest court to wholly eliminate affirmative action in college admissions — charge that UT-Austin denied her admission because she is White. Also denied admissions during that 2007 round of applications, critics of Fisher’s lawsuit note, were 168 Black and Latino students with higher GPAs, test scores and subjectively assessed personal essays than Fisher.

In addition, 42 of the 47 students admitted ahead of Fisher were White; the remaining five were Black or Latino. Those facts, too, critics contend, aren’t mentioned by the lawyers or Fisher, who graduated from a Sugarland, Texas, high school with a 3.59 GPA and 1,180 out of the 1,800 points possible on the SAT.

‘Do the right thing’

Whatever the Supreme Court decides, it’s becoming more necessary for diversity proponents to follow the proactive leads of those such as Peter Taylor and his UCLA cohorts, observers say.

“The reason we are back in this situation, revisiting this issue, is that Supreme Court decision in 2003 did not address the right problem,” says Dr. Juan Gilbert, chairman of the Computer & Information Science & Engineering Department at the University of Florida.

“There is a myth that, if I want to get diversity, I have to sacrifice quality during the admissions process,” continues Gilbert, director of the University of Florida’s Human Experience Research Lab and creator of Applications Quest. That software aims to ensure diverse freshman classes without the use of race-based affirmative action, Gilbert says.

The Michigan case, Gilbert says, was the catalyst for his software: “It works within guidelines of what colleges say is permissible. You must consider multiple attributes on the application. Race and ethnicity are not points of favoritism … It factors in the differences in [academic rigor] in, say, Ohio and Florida … in chemistry or English or computer science classes [in different schools]. … If I can measure those differences between two applications that means I can take a qualified applicant pool and compare every applicant to the other applicant, then place them holistically in an application pool that is similar.”

Likewise, Peter Taylor and his UCLA partners are hoping the work they are doing “becomes scalable,” he says. “We want to transport this work to other colleges around the country.”

Broadly speaking, efforts on what is the largest of the University of California’s 10 campuses include recruitment through Southern California churches; informational sessions at neighborhood coffee shops for students with little means to visit campus; mentoring, orientation and related support programs for Black males through their senior year; and scholarships from the Black Alumni Association to fill in the financial gap created by Proposition 209.

Rialto, California, native Donté Miller, 22, a UCLA bachelor’s degree holder now enrolled in an educational counseling master’s program, has been watching and listening to some of the debate about Fisher and the Supreme Court case bearing her name. Miller — raised by a single parent and hailing from one of the state’s least-resourced and mainly Black and brown school districts — says that he is dismayed that at least some of his White classmates likely misperceive all non-White UCLA students as affirmative action beneficiaries who academically “do not merit a place on campus.”

Still, adds Miller, a product of UCLA’s Black Male Institute for undergrads, “having people tell you, ‘This is how you do it, this is how you succeed here,’ that’s been the real value in all of this for me.”

Says Youlanda Copeland-Morgan, UCLA’s associate vice chancellor for enrollment management: “As a result of these efforts — by being intentional and bold — this year we posted our highest graduation rate of African-Americans ever. Eighty percent graduated. Eighty percent? That’s unheard of. Around the country, it’s unheard of.”

ECMC, the United Negro College Fund (UNCF) and the Gates Millennium Scholars are among the array of key supporters of UCLA’s diversity-minded endeavors.

“With Fisher, we’re hoping the courts will do the right thing,” Copeland-Morgan says. “But we’ve got to do more than that. We’ve got to refocus. We’ve got to be intentional and innovative. Let’s put our money where our mouth is.”