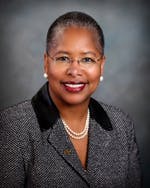 A federal judge ruled that Dr. Kassie Freeman, who was serving as Southern University interim president in 2009, was justified in implementing her reorganization plan.

The Southern University System’s former special assistant and counsel to the president has lost a Title VII retaliation and age discrimination suit stemming from elimination of her position.

A federal judge in Baton Rouge found insufficient evidence that Frances Smith’s testimony in a 2007 sexual harassment case against the university’s board of supervisors was the reason Southern terminated her in 2009.

According to the decision, then-President Dr. Ralph Slaughter asked Smith for advice about the university’s sexual harassment policy in 2007. The situation involved allegations of sexual harassment by a board member. Smith testified at a hearing in the related litigation.

In 2009, the board did not renew Slaughter’s contract and named Dr. Kassie Freeman as interim president.

Freeman then developed a reorganization plan that included budget and personnel cuts. That plan eliminated Smith’s position and created an executive counsel position instead. At the time, Smith was 64 and replaced by a 47-year-old woman.

Even so, Smith failed to substantiate the allegation that Southern terminated her two years later in retaliation for that testimony, Brady said, and Smith’s “subjective belief concerning a vague comment she overheard” isn’t enough to let that claim go to trial.

As for age discrimination, the judge said the university provided a non-discriminatory, legitimate rationale for the termination, namely the qualifications of Smith’s replacement and a $70,000 net savings to Southern’s budget.

The case arose from a long-running dispute between an African-American library technician, Patricia Flanigan, and her supervisor, who is Asian, according to the decision.

Flanigan was hired in 1988 and has had her current supervisor since 2008. Her two co-workers are Asian and Hispanic.

The suit contends that the supervisor emailed Flanigan daily with accusations of “job infractions” and that the supervisor refused to approve her leave request and criticized her telephone conduct as unprofessional. In addition, Flanigan’s performance rating dropped from “very good” to “good.”

Flanigan attributed those incidents to retaliation for filing EEOC complaints.

U.S. District Judge Louise Flanagan granted the university’s motion to dismiss the case, saying there are no facts to demonstrate that the supervisor’s behavior was based on Flanigan’s race.

Flanigan didn’t allege that the supervisor’s employment-related criticisms were unjustified or that her non-Black co-workers had committed similar infractions but were treated more favorably, the judge said.

“The mere fact that Flanigan finds her supervisor difficult to work with does not generate liability for a hostile work environment,” the decision said.

In addition, her “dip on a single performance evaluation is not meaningful,” the judge said.