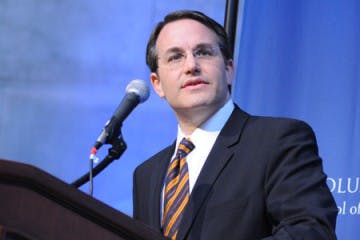 WASHINGTON — Although the nation’s social policies and laws have evolved to the point where blatant racial discrimination against its Black population is largely a thing of the past, social scientists need to come up with better language that describes the racial inequalities that nevertheless persist in contemporary American society.

That was the crux of the message delivered Monday by Robert C. Lieberman, provost and senior vice president for academic affairs at Johns Hopkins University and a noted scholar on issues of race and American politics.

“What we need to do is find a way of understanding and deciding and thinking about the ways in which things that look like racially neutral institutions, racially neutral policies, racially neutral practices can result in dramatically unequal outcomes,” Lieberman said during a Black History Month lecture titled “Race Relations in the United States.”

“That’s the fundamental conundrum, that’s the challenge of social scientists and the challenge of political scientists to understand,” Lieberman said in a lecture that was largely a historical overview of racial attitudes and discriminatory practices in the United States but that also delved into other topics that ranged from fatal encounters between Black men and police to the racially tinged politics that have colored much of President Barack Obama’s presidency and the 2016 presidential election.

Apprised of Lieberman’s remarks, several Black political scientists expressed varying degrees of agreement and dissension with some of Lieberman’s conclusions about the lack of language to describe the racial inequalities that persist.

In fairness, when questioned further by Diverse, Lieberman acknowledged that social scientists and political scientists are “thinking very hard and very carefully and rigorously about these issues.”

“I don’t want to paint an entire group or discipline with a broad brush but certainly my own discipline of political science has not yet found the analytic vocabulary to … really describe the set of institutional phenomena,” Lieberman said. “There’s a group of us that are trying to attack this set of problems efficiently. There’s a lot of great work going on, and I don’t want to disparage that brilliant work that’s being done in a lot of fields.”

Melina Abdullah, professor and chair of the Department of Pan-African Studies at Cal State Los Angeles, noted that, even in times of more blatant racism, not all laws were blatantly racially discriminatory, so policies that are on their face racially neutral are nothing new.

“If we think about why we needed the Voting Rights Act, it’s because people were finding their way around the 15th Amendment,” Abdullah said. “Even things like poll taxes and literacy requirements didn’t say, ‘It’s because you’re Black.’ They were implemented in order to keep Black people out.”

Abdullah said language exists to capture the phenomena of racism in modern society, although she acknowledged there could be more. Asked for examples, she cited the writings of Michelle Alexander, an associate law professor at The Ohio State University, in her critically acclaimed “The New Jim Crow: Mass Incarceration in the Age of Colorblindness,” and “Racism without Racists: Color-Blind Racism and the Persistence of Racial Inequality in America,” by Eduardo Bonilla-Silva, Professor of Sociology at Duke University—the latter of which Lieberman actually cited in his talk.

Rickey Hill, professor and chair of the political science department at Jackson State University, had no shortage of terms that he said could be employed in discussions of racial inequality in the United States: “Such concepts as racism, racial domination, oppression, class exploitation, expropriation, marginalization, discrimination, dispossession, cultural aggression, and gender difference are measurable and plausible descriptors in discourse.”

“We must remember that law and social policy always had de facto practices and functions,” Hill said. “Consequently, the racial contract, the racial polity, and the racial order continue to operate against Black people and other non-Whites as subpersons within the American and Western social contracts.”

In his talk, Lieberman said there is a need for more scholarship that transcends analysis of racial inequalities in the United States.

“We need also alongside the analytic understanding of the dynamics of racial inequality in the United States, we need a better understanding of the lived experience of diversity in the United States,” Lieberman said. “Social scientists are beginning to come to grips with this challenge: What does it mean to be an African-American man in a big American city? How does it affect your life as it rolls out?”