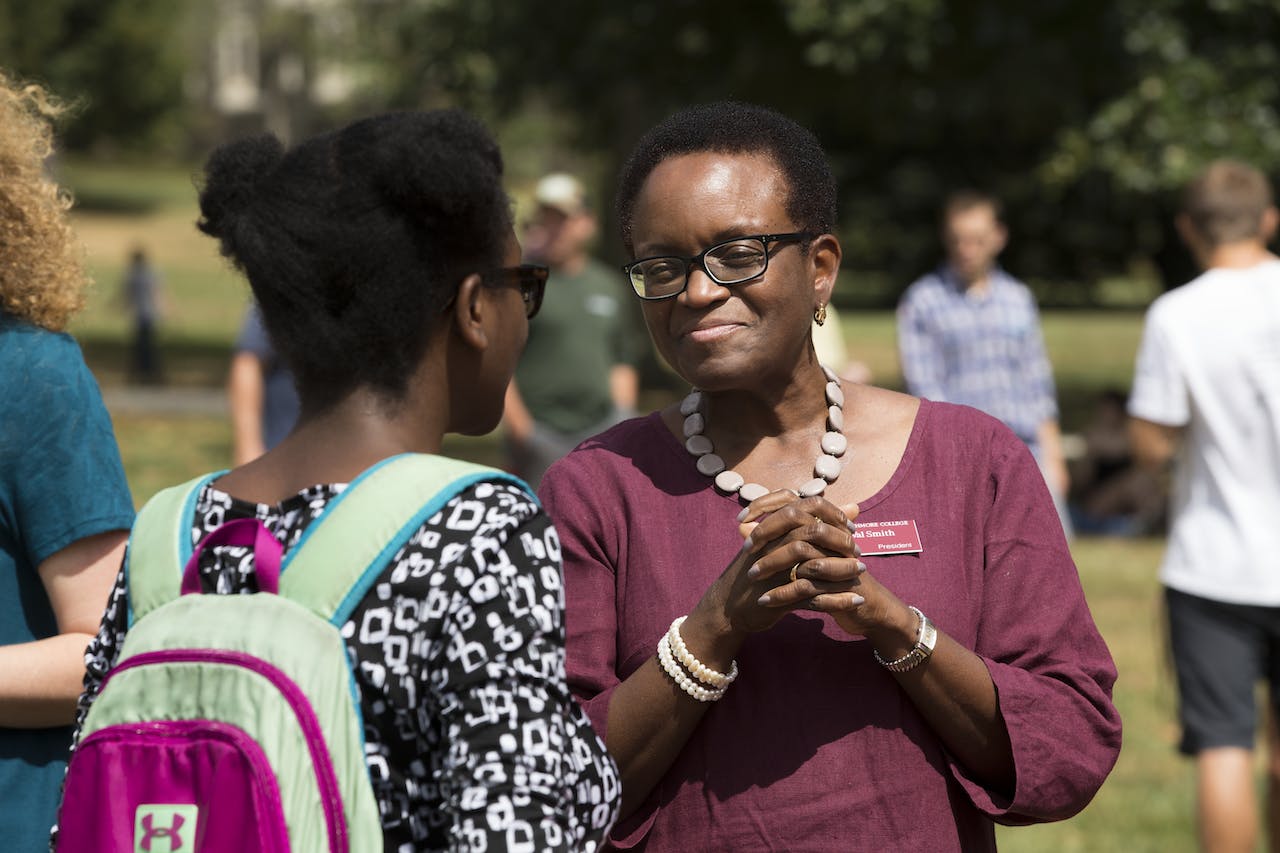 Valerie Smith has always been something of an anomaly.

While her peers were beginning their sophomore year in high school, Smith was headed to Maine, where she would enroll as a student at Bates College at the young age of 15.

Her father, Dr. W. Reeves Smith, a retired biology professor at Long Island University, insisted that his daughter take a look at the small liberal arts college where Dr. Benjamin E. Mays—the prolific Black preacher and longtime president of Morehouse College—graduated from in 1920.

“Once I got there, something clicked and I just felt very comfortable,” says Smith, who served for 11 years on the college’s board of trustees. “I really believe in the small liberal arts college model.”

She could not have known that her career trajectory would follow that of her parents (her mother is a retired schoolteacher) nor did she fully conceptualize that she would be a college professor until the final years of her graduate studies.

“It wasn’t until I was writing my dissertation that I realized that I was following in my father’s footsteps,” says Smith. But teaching “was in my DNA, and I was just not aware of it.”

Her scholarly work and her advocacy for the liberal arts, coupled with experience overseeing undergraduate academic programs, quickly catapulted Smith to the top of a search committee list that ended with her being named the president of Swarthmore College, the small but competitive school that has approximately 1,500 students and is located about 11 miles outside Philadelphia.

Smith, 60, who is the first African-American to lead Swarthmore College, is no stranger to being a first. In 2011, she became the first Black woman to become dean of the college at Princeton.

As a senior academic officer, she presided over all of Princeton’s undergraduate programs, making her a visible presence on the Ivy League campus.

With a Ph.D. from the University of Virginia, the Brooklyn native arrived at Princeton in 1980 as an instructor in English and African-American studies, eventually earning tenure in 1986. Three years later, she resigned her post and headed west to join the faculty at UCLA.

But by 2001, she was back at Princeton as the Woodrow Wilson Professor of Literature and a professor of English and African-American studies. She also was the founding director of the Center for African American Studies. In this role, she was instrumental in luring Dr. Cornel West back to Princeton after his public spat with Harvard President Lawrence Summers and recruiting Dr. Eddie S. Glaude Jr. to the faculty.

Glaude is currently chair of the center that now officers an undergraduate major in African-American studies. He praises Swarthmore’s decision to select Smith for the job, adding that it was a bold move.

“Her appointment, much like that of Dr. Ruth Simmons at Smith College] and Brown [University], has historic significance,” says Glaude. “The landscape of higher education is changing daily, and we now have a leading light at the helm of one of the most important liberal arts colleges in the country.”

Ironically, Smith didn’t enter the academy dreaming of becoming a college president someday. She says that the calling was progressive and occurred over time. “I didn’t realize I could aspire to it,” Smith says, adding that, over the years, she watched as more individuals with similar backgrounds as hers made the transition to the top leadership post. Only then did it “begin to seem possible,” she says, that she could someday become a college president, too.

Smith developed mentors and followed the successful careers of other college presidents such as Drs. Freeman Hrabowski III, Shirley M. Tilghman and Johnnetta B. Cole.

Now, seven months into the job, she says that Swarthmore will continue to be an academically rigorous institution where students emerge as leaders who are intellectually curious about the larger world. She wants to make sure the college remains accessible to students despite the rising costs of a college education, too.

Smith is also tasked with changing the perception that the school does not take hot-button issues, including sexual violence on campus, seriously. In 2013, a group of students filed a federal complaint with the U.S. Department of Education against the college that alleged, among other things, that the college underreported sexual violence on campus and deterred victims from reporting. The students claimed that administrators intimidated and discriminated against staff and students who complained about Clery Act violations.

A group of activist students have also called on Swarthmore to divest of the fossil-fuel companies in the institution’s $1.9 billion endowment. Last spring, students staged a 32-day sit-in to convince the college’s Board of Managers to divest. Their efforts were unsuccessful.

A prolific teacher and administrator, Smith also has a tenured appointment in Swarthmore’s English Literature Department and Black Studies Program. She says that eventually she will return to the classroom, though she is not certain just when.

“I’ve spent so much of my adult life in the classroom,” she says of her desire to return to teaching. “It will be an important way to connect with students and colleagues.”

Her colleagues say that Smith’s research in the field of African-American literature has broken barriers and has set her apart from other literary scholars.

“She represents so much of what is good about African-American literary studies—the particularity of the universal; the understanding of disciplinarity and its usefulness as a point of entry, not as a point of rest; and the signal ways Black culture and its aesthetics have enlivened the American academy and the world,” says Dr. Dana A. Williams, chair of the Department of English at Howard University and president of the College Language Association.

“I don’t think it’s an exaggeration to say that her work in literary studies, in general, and in African-American literature and on Toni Morrison in particular, is crucial to her academic distinction. You can’t do the work we do in literature and culture and not be transformed, enlivened by it. African-American literature emboldens you, if it doesn’t [also] require you to be better and then to build a better world where we can all live out the fullness of our humanity.”