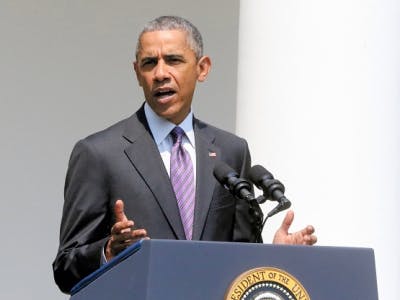 WASHINGTON — Despite high school graduation rates being at a record high of 82.1 percent and with rising numbers of minority students heading to college, President Barack Obama’s proposed fiscal 2017 budget freezes funding for most higher education and student aid programs that serve low-income and minority students, according to a budget analysis released Thursday on Capitol Hill.

“We are deeply disappointed the budget freezes funding for key foundational education programs,” said Makese Motley, president of the Committee for Education Funding, or CEF, a coalition of education associations that released the analysis titled “Education Matters: Investing in America’s Future.”

Funding would also be frozen for the federal Work Study program at $989.7 million, the discretionary funded portion of Pell Grants at $22.5 billion, and Supplemental Educational Opportunity Grants, known as SEOG, at $16.7 million as well as the TRIO and Gaining Early Awareness and Readiness for Undergraduate Program, or GEAR UP, initiatives at $900 million and $322.8 million, respectively.

The president’s budget proposal would provide sufficient discretionary money to maintain the Pell Grant base award of $4,860 and, with the mandatory add-on funds and statutory inflation adjustment, would increase the maximum grant for the 2017-18 academic year by $120 to $5,935.

While higher education spending overall would increase by $207 million, or 6.8 percent, according to the analysis, the budget reflects the administration’s continued emphasis on competitive grant-funding.

For instance, the budget proposes a $30 million new discretionary program—the “HBCU and MSI Innovation for Completion Fund”—that is “designed to support innovative and evidence-based, student-centered strategies and interventions to increase the number of low-income students and students of color completing degree programs at HBCUs and minority-serving institutions.”

While some observers say it is unlikely that a federal budget would be passed by a Republican-controlled Congress prior to the 2016 presidential election, they still see the president’s proposed budget as an indication of where things may be headed.

“The president’s budget is not gonna go anywhere. It’s a presidential election year,” said Motley, who is also assistant director of federal relations and policy analysis at the American Association of State Colleges and Universities. “But we do view it as a marker for the future.”

And a disquieting one for higher education, particularly for institutions that serve minority students, other stakeholders said at the analysis briefing Thursday.

“We have a lot more minorities coming through to higher ed, and they’re making a stop at HSIs and HBCUs and tribal colleges,” said Selene Ceja, of the Council for Opportunity in Education, an organization that advocates for, among other things, expanding college opportunities for low-income, first-generation student.

Ceja, one of the authors of the budget analysis, said that, while the Obama administration maintains that a $30 million MSI innovation grant in the president’s proposed budget would provide opportunities to bring more funding to minority-serving institutions, “unfortunately, it dilutes the idea that these institutions need continued and progressive funding to expand their services.”

“The higher education community appreciates the president’s continued support for the Pell Grant program, the campus-based aid programs, and the other core programs that help low-income students enter and graduate from college,” the analysis states. “However, it is important to acknowledge over the past several years budget savings measures adopted by Congress and the Administration have had a serious negative impact on postsecondary students.

“In fact, since 2011, students in higher education have lost over $75 billion in financial aid benefits,” the analysis states.

The analysis says the losses have occurred through the elimination of the year-round Pell Grant and various eligibility changes in the Pell Grant program, among other things.

“The cumulative effect of these changes on students is daunting,” the analysis states. “These programs are not adequately funded to meet the demonstrated need.”

The president’s budget proposes a reinstatement of the year-round Pell Grant, which would allow students to earn a third semester of Pell if they have already completed 24 credits.

“Eligible students will be able to receive up to 150 percent of their regular Pell Grant award, allowing students to complete degrees and enter the workforce or graduate education on time or even faster,” the analysis states.

The budget also proposes an “On-Track Pell Bonus” of $300 for Pell Grant students who take 15 credits per semester—the idea being to encourage students to complete their degrees on time.

Motley—the CEF president—said that colleges and universities are not enthused about placing more restrictions on Pell funds and that the idea needed to be studied further.

He also expressed reservations about the America’s Promise proposal to provide two years of free community college, saying it could cause students who would do well at competitive four-year colleges to enroll in community colleges instead, simply because it would be free.

The proposed program would cost $60.8 billion over 10 years.

“Is that the best use (of money) when you could put it into existing programs and it would go a long way?” Motley asked. “We’re studying it in great detail.”