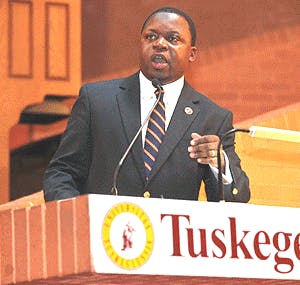 The Andrew W. Mellon Foundation—one of the nation’s most recognized philanthropic organizations—has granted $100,000 to Tuskegee University, bringing the total gift recently given to the private Alabama historically Black university to $600,000.

In 2015, The Mellon Foundation gave $500,000 to the university to support the implementation of the new Bachelor of Arts degree program, which included majors in music and visual arts.

“I am very grateful for The Andrew W. Mellon Foundation’s continuous support of Tuskegee University’s present direction,” said Dr. Brian L. Johnson, who became president in 2014 of the university founded by Booker T. Washington. “With a recently adopted strategic plan 2015-2020, this generosity will further increase the university’s capacity to make Tuskegee University a 21st century higher education institution of first choice for students within a variety of disciplines.”

Johnson said that the latest gift will be used to support a wide range of academic initiatives that are in line with the mission of the Mellon Foundation.

Since taking the helm of the HBCU, Johnson has been quite successful in securing major gifts for the university. In December, the Lilly Endowment Inc. announced that it was giving the university a grant of $600,000 to establish the Macon County Bridge Builders Program, aimed at encouraging young people to explore theological traditions, their faith and service.

Last year, an alumni family anonymously gifted $600,000 to the university to renovate two residential spaces for students on campus.

Johnson said that Tuskegee is convening corporations and foundations to be held at the NCAA headquarters in Indianapolis in September, thanks to the financial support of the Arthur Vining Davis Foundation and the Indiana University Lilly Family School of Philanthropy.