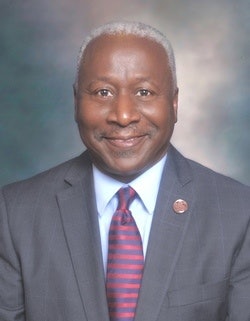 With its concerns about retaining its accreditation put to rest earlier this month, South Carolina State University looked within its ranks and named Board of Trustees member James E. Clark the 12th president of the historically Black institution on Wednesday.

Clark became a trustee last year in the wake of the state government firing the entire board as a result of the university’s growing debt and allegations of financial mismanagement. Clark assumes the post on July 1, taking over for interim president Dr. W. Franklin Evans.

“Having been closely involved with the accreditation process, I am acutely aware of the accreditation board’s concerns about our financial condition and the commitments we needed to make to retain our accreditation,” said Clark, who is a graduate of M.I.T. and the M.I.T. Sloan School of Management. “I am also fully committed to strengthening the learning opportunities of every S.C. State student, whether it’s in the classroom or through practical real-world experiences.”

Board Chairman Charles Way says Clark didn’t seek the job, but fellow trustees noticed over the past several months he was perfect for the job.

“To fulfill the commitments we made in securing accreditation and strengthening further S.C. State’s financial condition, we need a leader with proven success in meeting these kinds of challenges,” said Way, who also noted that the university in Orangeburg has balanced its budget and surpassed its enrollment goals over the past year. “James Clark knows how to build and lead teams to success.”

Clark’s resume includes being vice president of a $1 billion division of AT&T, which he turned around from being a money-losing operation into the most profitable division in AT&T’s computer business. He also has worked with General Electric, Gillette and Exxon International.