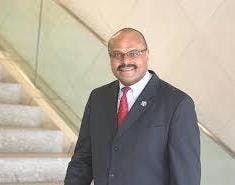 First, the Ph.D. Project, a group that works to increase the diversity of business school faculty, inducted Jones into its Hall of Fame.

Jones said the Ph.D. Project was created in 1994 as a result of the need to boost the ranks of underrepresented minority college graduates.

“One significant way to do so is to increase the minority representation at the front of the classroom,” Jones said at the organization’s annual Faculty Dinner earlier this month in Atlanta. “In organizing the Ph.D. Project, what may not have been anticipated is the greater impact that this wonderful initiative would have on society.”

Jones, who was named to his current position in last year, also has been dean of the business schools at the University of Arkansas and Louisiana State University, founding executive director at the Sales Excellence Institute, and an associate dean and professor of marketing at the University of Houston. Jones earned his bachelor’s degree in journalism, his MBA and his Ph.D. in marketing at Texas A&M.

His overall body of work led the American Marketing Association to present him with its 2016 Lifetime Achievement Award. The group cited his “meaningful contributions to the field of sales through publications in top journals, teaching excellence, fostering professional development among others, and generally contributing to scholarship in the area of sales.”