WASHINGTON — The longstanding effort to clear the name of Marcus Garvey — the pioneering Pan-Africanist credited with starting the largest black nationalist movement in history — got a jolt of new energy Wednesday as the iconic Black leader’s son, a law professor and a contingent of civil rights personages called on President Barack Obama to grant Garvey a posthumous pardon. 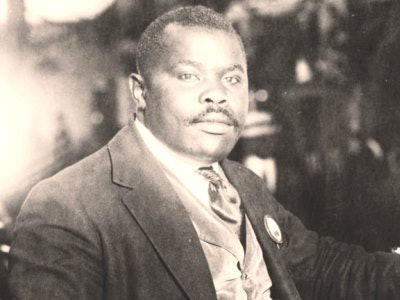 “Why is this the right time to exonerate Marcus Garvey? The reality is there’s never been a better time to do so,” said Justin Hansford, St. Louis University law professor and Harvard University Democracy Project fellow, tying the efforts of Garvey — who launched the Universal Negro Improvement Association in 1914 in Jamaica and later established a New York City branch in 1916 — to today’s Black Lives Matter movement.

“I believe we’re at a turning point in our racial justice history — a time when we’re trying to affirm, perhaps for the first time, that, yes, Black lives do matter in this country,” Hansford said. “And this (pardon effort) is part of this process.”

Hansford made his remarks Wednesday at the National Press Club at an event meant to call attention to the posthumous pardon request that lawyers advising the Garvey family submitted to the Department of Justice and White House this past June.

Garvey was convicted of mail fraud in 1923 for activities associated with a UNIA shipping company — the Black Star Line — in a trial that supporters say was racially and politically motivated to discredit Garvey and disrupt his movement. Garvey was sentenced in 1923 to serve five years in prison. President Calvin Coolidge commuted his sentence in 1927. However, Garvey was deported the same year.

At Wednesday’s event, Hansford was joined by Garvey’s son, Julius Garvey, a surgeon, who said the current condition of Black people in the United States 100 years after the Jamaican-born Garvey came to the country is a testament to the fact that his father’s vision has yet to be achieved. Despite the fact that the United States has a Black president, there is only a deceptive “guise” of equality, integration and a “post-racial society,” Garvey said.

“I think we can draw a straight line over a hundred years when my father came to this country in 1916 to now — 2016 — and young Black men are being shot in the streets in this ‘post-racial era’ in the largest and most powerful democracy in the world,” Garvey said. “I think there’s a lesson here to be learned.”

He said the Black Lives Matter movement is “showing us that our young Black children are tired, tired of racism, they’re tired of poor education. They’re tired of lack of skills. Tired of living in a society that has marginalized them and restricted their opportunity to be a full human being.”

“That is the way it was when Marcus Garvey came to America,” Garvey said.

Garvey suggested that President Obama would not be president were it not for Marcus Garvey and successive civil rights leaders, such as Malcolm X and Martin Luther King, Jr., or African independence leaders such as Jomo Kenyatta, first president of a liberated Kenya — Obama’s ancestral homeland — who were all influenced by Garvey.

“Everyone stands on the shoulders of those who have gone before us,” Julius Garvey said. “There would be no Black president if it were not for the civil rights movement. The president stands on that foundation.

“Jomo Kenyatta proclaimed himself a Garveyite,” Garvey continued. “If there were no Kenyan nation headed by Kenyatta … there would not have been a Kenyan national that came to the United States to study,” Garvey said of President Obama’s father, Barack Obama, Sr., who met the president’s mother in the 1960s while he was a student at the University of Hawaii.

Beyond the symbolism that a posthumous pardon for Garvey would represent, speakers said the reason to clear Garvey’s name is because he is innocent and a victim of malicious investigation — headed by a young J. Edgar Hoover — then-director of the Bureau of Investigation, forerunner to the FBI, which Hoover would later direct — and subsequent court proceedings meant to disrupt the movement headed by the man that Hoover dubbed as a “notorious Negro agitator.”

But the quest for a posthumous pardon could end up being an elusive one. Presidential posthumous pardons have only been granted twice, according to research conducted by Stephen Greenspan, author of a 2011 paper titled “Posthumous Pardons Granted in American History.”

Plus, President Obama hasn’t shown an inclination to grant pardons for the living — much less for those who are deceased — and could possibly grant the fewest of any president in American history. Thus far, Obama has granted 70 pardons during his administration, which is lower than the 74 granted by George H. W. Bush, according to clemency statistics compiled by the U.S. Department of Justice.

“President Obama did not have a good record on pardons or commutations, except until recently when he stepped up to the plate on many people serving excessive sentences under (drug) statutes,” said Greenspan, who is a clinical professor of psychiatry at the University of Colorado. “Maybe as he is leaving office, he will do the right thing without worrying about the politics.”

Some Garvey experts, however, are not optimistic.

“It seems unlikely that this or any administration in the foreseeable future would act to pardon Garvey,” said John B. Gartrell, director of the John Hope Franklin Research Center for African and African American History and Culture at Duke University, which recently acquired the Robert A. Hill Collection of the Marcus Garvey and Universal Negro Improvement Association Papers Project Records.

“Garvey remains a polarizing figure even today, and to me, it doesn’t help that Garvey is not a native born citizen,” Gartrell said. “But, pardon or no, it doesn’t quell the impact that his influence had and continues to have on people of African descent around the world.”

Robert A. Hill, professor emeritus of history at UCLA, shied away from the question of the merits of a posthumous pardon in an e-mail interview with Diverse.

“The question is not really a historical one. It is rather a political one,” Hill wrote. “Thus, politically, if you are in favor of a posthumous pardon or exoneration of Garvey, then the answer to the question obviously becomes a political one.”

Be that as it may, it is one that supporters of the effort — which at Wednesday’s event included Attallah Shabazz, daughter of Malcolm X, and former Congressman and former NAACP president Kwesi Mfume — are hopeful that Obama will respond favorably before he leaves office. Several Congresspeople — including Congresswoman Yvette D. Clarke (D-NY) — submitted statements in support of the posthumous pardon for Garvey.

“President Obama should take the appropriate measures to clear Marcus Garvey’s name, showing that it is never too late to right a wrong,” Clarke’s statement, which cites a similar Congressional push — spearheaded by Congressmen John Conyers and Charles Rangel — to exonerate Garvey in 1987. “It is time to exonerate Marcus Mosiah Garvey and let history reflect the true nature of his legacy.”

The hashtag for the effort to exonerate Marcus Garvey is #Justice4Garvey.