Back when he was a high-ranking detective within the Milwaukee Police Department, Milwaukee County Sheriff David A. Clarke—now a national lightning rod figure for the political right—did me a small but memorable favor. 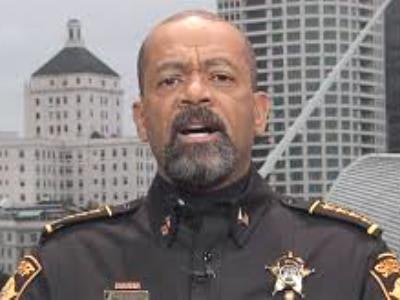 I was an undergraduate at the University of Wisconsin — Milwaukee at the time, working my way through college as a part-time night-shift crime reporter at the former Milwaukee Sentinel. It was the early 1990s, long before Clarke had really displayed any political leanings of any sort.

A shooting had just taken place at a residence in an impoverished area on Milwaukee’s north side.

Whereas typically police cordon off the crime scene with yellow tape and keep the media at bay, on this particular occasion, for whatever reason—I’m guessing it was because I was a print journalist and the only one there that bitter cold night—Clarke allowed me to observe as officers shined a floodlight on a suspect for an on-the-spot show-up.

To the delight of my editor, I included this small but significant detail in my article, making the brief news account just a little more vivid than it would have been otherwise.

I thanked Clarke for granting me this unusual access to the proximity of a crime scene.

“Sure, no problem,” the towering Clarke told me—the condensation from his breath dissipating into the cold Milwaukee air—before we went our separate ways.

It would be one of the last times I dealt with Clarke on a face-to-face basis.

One of the next times I dealt with Clarke—or at least the county agency that he took over once he was appointed and later elected as sheriff in 2002—would be quite different.

And it would come to represent just one of several experiences during my time as a crime reporter in Milwaukee that demonstrated how law enforcement often target young Black men as suspected criminals, while at the same time turning a blind eye to the role that White men play in contributing to crime in the inner city.

These cases are worth bringing up now since Clarke—speaking at a news conference in the wake of the violence that engulfed Milwaukee after a police officer there fatally shot an armed suspect during a foot chase that began with a traffic stop—exhorted protesters to “Stop trying to fix the police. Fix the ghetto.”

As if all of the problems that protesters are confronting emanate from a certain sociodemographic area that can be simultaneously described and dismissed in this single pernicious pejorative.

Marc Lamont Hill, distinguished professor of African American studies at Morehouse College, suggested on CNN recently that Clarke’s use of the word “ghetto” is kind of an ideological code speak to describe certain segments of the population.

One of the dangers of the way Clarke used the term is that it makes it seem as if White people (or others, for that matter) who reside elsewhere don’t ever visit the “ghetto” to perpetrate their own offenses, whether it be to buy drugs or sex or—in the case that I investigated and that I’m about to describe—to traffic in guns.

The case I’m referring to occurred in 2003 shortly after Clarke rolled out a controversial program called GRIP—an acronym for the Gun Reduction Interdiction Program.

The program, which was set up in areas of the city that happened to be predominantly Black and Latino and focused on young men in those areas, involved having deputies conduct traffic stops, then asking the motorists they stopped for permission to search their vehicles, the idea being to find illegal guns.

A lot of people had issues with the program, namely that it infringed on the rights of law-abiding citizens and targeted minorities, not to mention that it was seen as a poor use of limited law enforcement resources.

Clarke conceded that his approach was problematic but defended it as necessary.

“I readily admit sometimes protecting people and making people safer, it is inconvenient and sometimes unforgivable and downright disgusting we have to do these things,” Clarke told the Milwaukee Journal Sentinel back in 2005 as GRIP neared its second anniversary.

But while others were merely debating whether GRIP unfairly targeted minorities, I decided to obtain court records on the actual criminal cases that arose from GRIP to see if that was in fact the case.

What I found was more troubling than I had anticipated.

Whereas Clarke made it seem as if Milwaukee’s illicit gun-toting was an inner city problem perpetrated by young Black and Brown males, it turns out that some of the first guns seized through the GRIP program involved three White residents from nearby Ozaukee County—the wealthiest county in the state and one that is about 95 percent White. They included a family businessman named Alan Bloch, who had come to Milwaukee to sell the guns to a Black man named Fredrick Jones—a convicted felon who didn’t want to go through the paperwork associated with buying a gun.

Surprisingly, Bloch actually contacted Sheriff Clarke’s GRIP program to complain that Jones had robbed him of the guns he was selling illegally on the streets of Milwaukee.

The guns in question were ultimately recovered in a “buy-bust” operation against Jones that one of Bloch’s associates, Phillip Zingsheim, helped the GRIP program set up with the Bureau of Alcohol, Tobacco, Firearms and Explosives, better known as the ATF.

The story gets better. But to truly appreciate it, it helps to understand how media access to the Milwaukee County jail got restricted under Sheriff Clarke.

Historically, members of the media visited inmates at the jail by simply going the same route as family or friends. No one seemed to have a problem with it, except Sheriff Clarke.

Once Clarke took over the jail, he required members of the media to go to a separate area to conduct “professional” interviews with inmates.

And, unlike lawyers who got to talk to their clients face-to-face in the same room, reporters still had to interview inmates through the intercoms embedded in the visiting booths where inmates speak from behind a glass partition.

I can’t prove it, but one of the reasons I think Clarke ordered this change is to be able to monitor the conversations that inmates have with journalists who visit them in jail, which couldn’t be done when we were visiting inmates as “friends.”

The way things unfolded after my interview only embolden me in this belief.

The reason I say this is because, when I went to interview Jones, one of the things he complained about was the fact that he was the only one who had gotten arrested and charged, whereas three White guys who were illegally selling him guns seemed to go scot-free.

This was about 11 weeks after Jones got arrested in the “buy-bust” operation.

Of course, it could be a mere coincidence that law enforcement would search Bloch’s home within hours of my jailhouse interview.

But the theory I choose to work from is that law enforcement searched Bloch’s home once they found out—by monitoring my interview with Jones—that I was about to write a news story about how some of the first guns seized by Sheriff Clarke’s GRIP program came from White men—not the stereotypical Black criminals that Clarke was targeting—and that these White men had not been charged in connection with their crimes.

I reached out to Sheriff Clarke via his communications staff on Tuesday to get a response. No one from the sheriff’s office had contacted me by the close of business on Friday.

It wasn’t until after I began investigating the case that Jason Bratten, an Ozaukee County gun store owner connected to the case, Bloch and Zingsheim were ultimately indicted and convicted in federal court. All were found guilty.

With the exception of Zingsheim, they all essentially got slaps on the wrist for conspiring to circumvent the gun laws designed to keep guns out of the hands of convicted felons.

Jones, the man who robbed Bloch of the guns that Bloch was trying to sell him illegally, got slammed with 10 years in prison.

The fairness or unfairness of the sentences is not the issue. The issue is how the case runs counter to this “ghetto” narrative of crime that Clarke has put forth to justify the GRIP program and to catapult himself toward the political popularity that he enjoys today among conservatives.

This was not the only case like this that I investigated in Milwaukee and found a weapon had been supplied illegally by a White perpetrator from outside the “ghetto” while the criminal justice system looked the other way.

Consider, for instance, the 1996 shooting of 13-year-old Laquann Moore, a Milwaukee girl struck and killed in a drive-by shooting by a gun so powerful that, after the bullet it fired tore through Laquann’s body, it struck and wounded her friend.

When a prosecutor described the gun used in the fatal shooting as “the kind of weapon the Vietnamese used against us in the Vietnam War,” I filed an open records request to find out how such a weapon could make its way into Milwaukee’s inner city.

It turns out, it wasn’t a true AK-47, but a Chinese-made Norinco Sporter rifle purchased from a local gun store by Robert C. Madden—a White man who was able to purchase the gun despite being a two-time felon because at the time there was no law that required a background check for long guns.

Similar to Bloch, Madden called police—twice—to report that the weapon was his, even though as a felon he wasn’t supposed to have it. The first time was after it was stolen while he supposedly “showed” the rifle to a man he met at a local bar. The second time was after he recognized it while watching TV news coverage of court proceedings for Laquann’s killers.

A state prosecutor declined to prosecute Madden and says he referred the case to federal prosecutors, but the feds say they never got the message from the state prosecutor as to why they were supposed to pursue charges in the case.

For that purported mix-up, a White, two-time felon who illegally bought a gun that ended up on the streets of Milwaukee and costing a 13-year-old Black girl her life never got charged in the case.

Meanwhile, the three young men who did the drive-by that killed Laquann all got lengthy prison sentences.

I don’t disagree with Clarke when he says that there is a need to “fix the ghetto.” Unquestionably, there are a host of social ills that Clarke correctly identified—from drug use and gang activity—as being in need of a remedy.

Where I disagree with Clarke is that there is no need to “fix the police” and, by extension, the criminal justice system as a whole.

There is no shortage of research that shows how Blacks are more likely to be arrested or stopped by the police than Whites or how the criminal justice system metes out more severe punishments to Blacks than Whites, even for the same offense.

Which is the reason why it’s so wrongheaded to talk about “fixing the ghetto” while at the same time ignoring how those outside the ghetto do things that contribute to the carnage and mayhem that helps to make the ghetto what it is.

But that’s not the kind of thing that scores points on the conservative right. It’s so much easier to put forth narratives that criminalize entire swaths of the Black population from “the ghetto” — one that Clarke says is prone to make “questionable lifestyle choices” — and to leave the myth of “law-abiding” White citizens and “responsible gun owners” in the outlying areas and the suburbs intact.