George E. Curry, an award-winning veteran journalist and a fierce advocate for the Black press, died from an apparent heart attack on Saturday evening. He was 69. 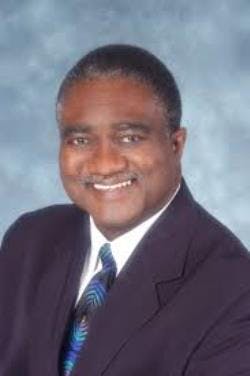 The former editor and publisher of Emerge magazine, Curry used the publication’s platform to raise awareness about critical issues that impacted the African American community and to take aim at controversial figures within the Black community like U.S. Supreme Court Justice Clarence Thomas, who he placed on the magazine’s cover twice, once wearing an Aunt-Jemima-style handkerchief and the other in a lawn jockey suit.

“If I had an opportunity to do it over,” he once quipped about his famous 1993 magazine cover, “I would tie the Aunt Jemima knot tighter.”

Over the weekend, journalists, celebrities and political figures paid tribute to the Tuscaloosa native whose career as a publisher, editor, columnist and reporter spanned across four decades.

“This was my man,” journalist Roland Martin tweeted on Sunday. “Fearless in the face of criticism. Willing to hold Black leadership accountable. Committed to Black media.”

“George Curry shouted when few wanted to hear, whispered when the message was for our ears only. His voice will long resonate.”

Curry got his early start in journalism at Sports Illustrated and the St. Louis Post-Dispatch. In 1983, he was hired at The Chicago Tribune to report on the city’s Black community, and would eventually go on to cover the Rev. Jesse L. Jackson’s historic 1984 presidential campaign along with a group of other Black reporters that included Jack E. White, A’Lelia Bundles, and the late Gerald Boyd.

“I am saddened beyond words upon hearing of the death of George Curry,” said the Rev. Al Sharpton who featured Curry on his daily syndicated radio show as a commentator every Friday. “He was a giant and a trailblazer.”

Curry had the distinction of not only working for the mainstream press. He became a visible leader and champion of the Black press. He dedicated his career to grooming the next generation of young Black journalists.

After serving as editor-in-chief of Emerge from 1993-2000, Curry became the editor-in-chief of the National Newspaper Publishers Association News Service—a trade organization of more than 200 Black newspapers—from across the U.S. At the time of his death, he was raising funds to relaunch Emerge online.

The founding director of the St. Louis Minority Journalism Workshop, Curry served for many years as the chairman of the board of trustees as his alma mater, Knoxville College.

As a student at Knoxville College in the 1960s, Curry—the son of a domestic worker and a mechanic—played on the football team and was the sports editor of the school’s newspaper.

He was a longtime member of the National Association of Black Journalists and was named one of the most influential journalists of the 20th Century by the organization.