On an early autumn day, approximately 1,600 people ascended to the heights of Thomas Jefferson’s Monticello for a summit on race, memory and slavery. 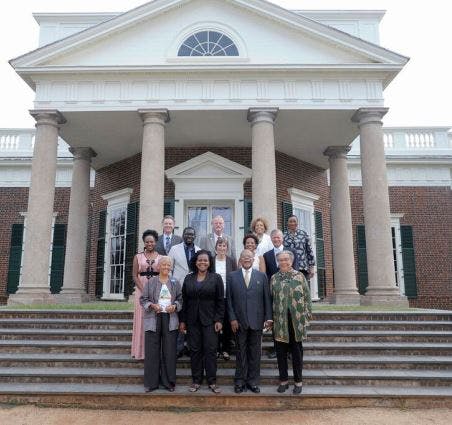 In a tent on the West Lawn, where Jefferson planted his formal gardens and kept a fishpond, they assembled to hear a gospel choir kick off the proceedings of “Memory, Mourning, Mobilization: Legacies of Slavery and Freedom in America,” a public event hosted by the Thomas Jefferson Foundation.

Gospel music and the scenic views from the lofty heights above Charlottesville, Virginia, were not the only draws. Attendees were also there to hear some of the nation’s foremost thinkers, activists, artists and historians discuss the continued struggle for civil equality, the aftershocks of slavery and Jefferson’s legacy.

The summit was the capstone of Human/Ties, a four-day event marking the 50th anniversary of the National Endowment for the Humanities (NEH). The organizers of Human/Ties, sponsored by the NEH, the University of Virginia (UVA), the Andrew W. Mellon Foundation, and the Thomas Jefferson Foundation at Monticello, structured the event around an examination of five general themes — race, war, the environment, globalization and democratic citizenship, through the lens of the humanities.

Among those also in attendance at the Monticello summit were descendants of the enslaved people who once lived and worked at Monticello. At the start of the event, Gayle Jessup White, a descendant of the Jefferson and Hemings families and a community engagement officer at the Thomas Jefferson Foundation, offered her thoughts on the importance of coming to terms with the past.

“What do the story of the slaves and their descendants have to do with race relations today? Everything,” she said. “People who don’t know their history and culture are like a tree without roots. … Slavery and its consequences, including Jim Crow, segregation and disenfranchisement, continue to cast a shadow over every American. It impacts how we live and too often, how we die.” 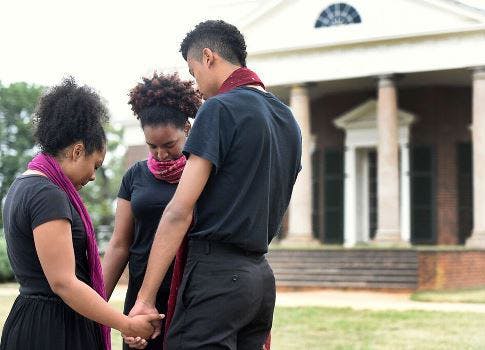 Members of the community performance project preparing for their performance on the West Lawn of Monticello.

Jefferson periodically gave voice to his ethical concerns about the institution of slavery, while also recognizing that the economy of the South was fatally entwined with it. “But, as it is, we have the wolf by the ear, and we can neither hold him, nor safely let him go. Justice is in one scale, and self-preservation in the other,” he said of slavery in 1820.

Moral quandaries aside, Jefferson remained dependent on slave labor to run his plantation for the entirety of his life. In total, he emancipated only nine of the slaves he owned, including the children he had with Sally Hemings, an enslaved woman. When he died in 1826, his slaves were sold to pay off his substantial debts.

As the home of the author of the Declaration of Independence, and also hundreds of people who were systematically deprived of their full right “to life, liberty and the pursuit of happiness,” Monticello was an apt location for a conversation on race and the memory of slavery, said Dr. Peter Onuf, UVA Thomas Jefferson Memorial Foundation Professor of History Emeritus and senior research fellow at the Robert H. Smith International Center for Jefferson Studies.

“We come here to understand the American experiment, assess its successes and failure,” he said. “Monticello exemplifies the messiness of history, the beauty of this place today and ugliness of the past.”

Jon Meacham, Random House executive editor and executive vice president and Thomas Jefferson Foundation trustee, voiced a similar sentiment: “To my mind, the moral utility of history, and the reason that Monticello is so good at this, is not to wag our finger at the past and simply feel better, but to try to look at our own world, and try to figure out: if the best of previous generations could be so woefully morally wrong, what are we in our time getting woefully and morally wrong?”

In the first of two panels, historians discussed the nation’s founding and the impact of slavery up to the civil rights era. Panelists included Marian Wright Edelman, founder and president of the Children’s Defense Fund; Dr. Edward Ayers, president emeritus of the University of Richmond; Annette Gordon-Reed, a professor at Harvard Law School and author of The Hemingses of Monticello; and Dr. Deborah McDowell, the Alice Griffin Professor of Literary Studies and director of the Carter G. Woodson Institute for African-American and African Studies at UVA .

The panelists said the country is far from coming to terms with its tormented relationship with race. When Obama was elected president, the nation was able to briefly delude itself that it had achieved a “postracial” society, Gates said. That was quickly revealed to be false, and the statistics on education and poverty show that gains in either area, once attained, cannot be taken for granted.

After the passage of the Civil Rights Act, efforts were made to desegregate public schools. A 2016 report from the Government Accountability Office (GAO) found that the number of schools in the United States with mostly poor and Black or Hispanic students grew from 9 to 16 percent between 2000 and 2014.

In terms of economic gains, since the death of Martin Luther King Jr., the Black middle class has doubled and the Black upper-middle class has quadrupled, “but at the same time, the percentage of Black children living at or below the poverty line has remained virtually the same,” Gates said. 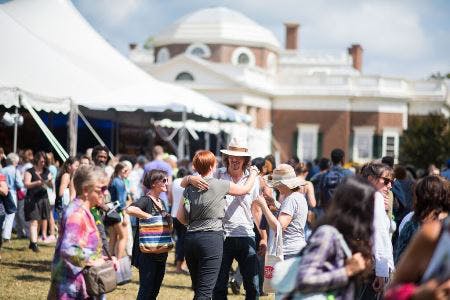 About 1,600 people attended “Memory, Mourning, Mobilization: Legacies of Slavery and Freedom in America.”

This indicates that there is a wealth gap between the White and Black communities, but also a troubling economic divide within the Black community itself, Gates said.

Economic disparity is still one of the major roadblocks to greater social equality, panelists agreed. Black poverty has become so “normalized” that it is viewed primarily as a moral failing, Newsome said, rather than a structural issue.

Panelists also spoke out against the prison system, which some likened to a contemporary version of slavery. Newsome pointed to an exception in the 13th Amendment, which mandates that there will be no slavery, “except as a punishment for crime.”

“All you have to do then is criminalize Blackness and you’re able to maintain slavery,” Newsome said.

Ayers said that the nation must grapple with all of its history.

“We cannot rectify the past, but we can acknowledge it, and acknowledge our own part of being complicit in the heritage that we inherited,” Ayers said. “People like to talk about heritage, but the thing is, you inherit everything. You don’t just get the nice silver and china. You get everything.”