Speak Up, Lift Up, Fall Back: What We Need from Social Justice Allies

Over the past three years, we have witnessed an increase in videos of unarmed Black men being killed at the hands of the police, the murder of 49 LGBT+ Latinx’s at the Pulse Nightclub, and, most recently, we witnessed one of our presidential candidates make overt demeaning statements about the Muslim population, undocumented individuals, and women. 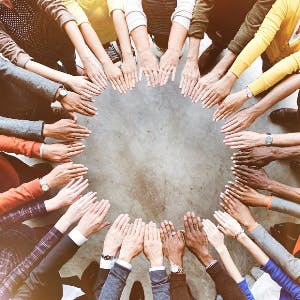 Given the current climate, there is a need for people to speak up and speak out against these acts of violence, and hate rhetoric. There is a need for as many voices raised as possible, which includes not only marginalized groups but also allies. A social justice ally is a person with a privileged identity and social position (White, heterosexual, Christian, documented, etc.) who engages in advocacy work alongside a marginalized group, with the ultimate goal of social and systemic justice.

We need social justice allies to speak up, lift up and fall back.

Allies can utilize their position of privilege to advocate for marginalized groups, particularly in spaces where they are not always heard. When they do speak up, allies should first acknowledge their privilege, then engage in challenging social justice dialogues, as well as fight for justice among the oppressed. By speaking up and standing firm in their support of social justice in the presence of those who are perpetuating oppression/discrimination, social justice allies can help create change.

Psychological research tells us that most people are more comfortable among those that are similar to them; thus, may be more likely to listen and be moved by someone with a similar background. Allies must directly confront individuals who are engaging in microaggressions, hate rhetoric, violence. It may even require the White ally to become a “White traitor” — a person who defies white rules so strenuously as to jeopardize their ability to draw upon whiteness and its carried privileges (Ingatiev, 1997). Allies must respond to every manifestation of supremacy as if it were directed against them, regardless of the potential backlash.

It is imperative that allies lift up the voices of social justice advocates who have marginalized identities. In this way, they serve as a support system alongside marginalized populations, without overshadowing current movements and their leaders. Being a social justice activist is emotionally and physically demanding for everyone, but particularly arduous for individuals fighting against their own oppression. It requires passion and perseverance regardless of the limited and/or delayed progress that we see far too often.

In addition to emotional support, because of allies’ privileged position in society, they need to provide platforms for marginalized groups to take steps toward transformation of societal restraints. They need to create safe spaces where equity is enforced and justice is served. This includes, but is not limited to, addressing microaggressions, disrupting and refuting stereotypes, and accepting an affirmative action stance. The intersection of being subjugated by dominant society (being oppressed) while fighting for equity is often taxing; therefore, allies should provide sturdy support through their words and their actions. Allies must uplift oppressed groups.

Often times, allies’ good intention is simultaneously motivated by altruism and self-interest. However, allies should not expect to receive praise for their efforts toward justice and equity. In fact, receiving honor when progress is made can be detrimental to marginalized communities. For example, folks upholding White racial framing (Feagin, 2013) and sometimes embodying the “White savior” character (the desire of White allies to publically identify with “good Whites” and to “save” communities of color) further perpetuate racially imposed dominant and subordinate societal positions. Therefore, even well intentioned progress toward justice and equity can be hindered if a person in privilege is at the forefront. Allies must be willing to humbly work from behind the scenes.

In times of turmoil and unrest, allies can ignite change and provide reassurance for the oppressed. However, being an ally is not easy. It requires the bravery to work toward the disruption and dismantling of hegemonic dominant systems, the courtesy to provide hope, and the modesty to avoid the spotlight.