Senators May Find Betsy DeVos not a Quick Read

As Betsy DeVos’ Senate confirmation hearing on Tuesday approaches, observers look to her past to divine what her priorities might be as education secretary. A billionaire in her own right and married to Richard DeVos, an heir to the Amway fortune, Devos has used her wealth to exercise considerable influence over philanthropic efforts and legislative initiatives related to education in her home state of Michigan. 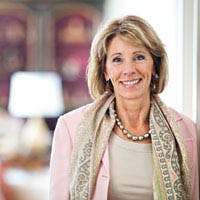 Politically, DeVos has consistently swung conservative, donating millions to Republican lawmakers over the years and sitting on the boards of conservative thinktanks and nonprofits dedicated to school choice. Yet despite her record, DeVos has attracted criticism in recent months from affirmative action’s staunchest opponents for her past positions on affirmative action policies.

In an opinion piece published in The Detroit News in July 2003, DeVos questioned the need for a ballot initiative on affirmative action policies when Gratz v. Bollinger had just been decided in June 2003. In the Gratz v. Bollinger decision, the U.S. Supreme Court ruled that the University of Michigan’s then-policy of awarding 20 points to underrepresented minorities in the admissions process was unconstitutional.

“No matter how well-intentioned, a ballot initiative designed to eliminate affirmative action programs in higher education here in Michigan could very well result in 18 months of vitriolic public discourse that centers on racial issues,” DeVos wrote.

The ballot initiative in question was the Michigan Civil Rights Initiative (MCRI), or Proposition 2, introduced to the state by Ward Connerly in 2003. Connerly is a former regent of the University of California who successfully introduced measures in California and Washington that banned affirmative action policies in both states.

To be clear, DeVos did not come out swinging in favor of affirmative action policies, writing:

“While the recent U.S. Supreme Court decision was a mixed bag, it very clearly struck down the University of Michigan’s race-based point system for undergraduate admissions. It has been evident to me that the great majority of people in Michigan agree with the Supreme Court’s finding that the U-M system was unconstitutional. Most folks saw that system, which awarded 20 admissions points to every applicant from some minority groups, as unfair, if not simply ridiculous. Rightly so.”

She went on to attribute the “perceived” need for college-level affirmative action policies, to a failed, two-tiered public education system that benefits wealthier students and leaves poorer students behind. DeVos and her husband opposed the measure again in 2006, when he was running a gubernatorial campaign. MCRI ultimately was voted into law by a vote of 58 to 42 percent in 2006.

A representative for DeVos, reached through her website, said that DeVos would not comment directly on her current stance on affirmative action policies due to her upcoming Senate confirmation hearing scheduled for January 17. “Her past record is a good indication,” the representative wrote in an email on Tuesday.

Supporters of affirmative action policies have raised concerns about the future of affirmative action under a Trump administration, as well as Title IX and the Office for Civil Rights. Shirley Wilcher, executive director of the American Association for Access, Equity and Diversity, told Diverse that her organization still is reviewing DeVos’ record and are waiting for her confirmation hearing for further elucidation of her views. The association sent a public letter to Senate leaders opposing the nomination of Jefferson Sessions for attorney general on Monday, raising concerns about his record on race.

“The higher ed community, from what I can see, really hasn’t weighed in on her, which I think is interesting, but it may be because she hasn’t really been involved in the issues relating to higher education,” Wilcher said of DeVos in a phone interview on Wednesday.

DeVos and the Republican Party may have chosen to not support Ward Connerly’s proposal for political convenient reasons, Wilcher said, echoing similar accusations leveled at the time when MCRI was still up for the vote. Critics said that Michigan’s Republican Party was loath to favor MCRI, fearing that it might bring more people to the polls who would otherwise stay home. At the time, DeVos denied that her decision to not support MCRI had political motivations.

“I think we probably would at least take her on face value that she did find the issue divisive and did not support it,” Wilcher said. “So for that reason we’ve decided to some more homework and more research and not simply oppose her, because we don’t know enough about her views on affirmative action.”

Until more specifics are revealed, it is difficult to say what the U.S. Department of Education will prioritize under DeVos’ presumptive leadership, said Neal McCluskey, director of the Cato Institute’s Center for Educational Freedom.

“Based on her background, I think that the only thing you can say with certainty is that she will definitely use the bully pulpit to talk about school choice at the elementary and secondary level,” McCluskey said. “That is what she has been most heavily involved in for the whole time she’s been involved in education policy, and that’s what President-elect Trump talked about the most, when he talked about education.”

Under a Trump administration, the Department of Education might be less likely to push some of the issues prominent during Obama’s tenure, such as Title IX and Dear Colleague letter guidance, McCluskey speculated. “Probably, they’ll be stepping off the gas on that, but again that’s more of an assumption than based on the specifics of what I’ve heard Trump or DeVos talk about,” he said.