Like many college students and adolescent movie buffs, the film Hidden Figures was not on the must-see list of Devin Houston in Jackson, Mississippi, and many young people or older adults as winter breaks ended and schools across the nation resumed classes.

Many would ask who wants to see a movie about three brilliant African-American women (Katherine G. Johnson, Dorothy Vaughan and Mary Jackson) who put their math skills to use at NASA. In addition, the movie is not a comedy, is violence free, not science fiction, and is absent loads of derogatory language and without loud, vulgar music or speeding cars and trucks. It uses chalk, pencils, basic adding machines, and dial-up telephones as props. 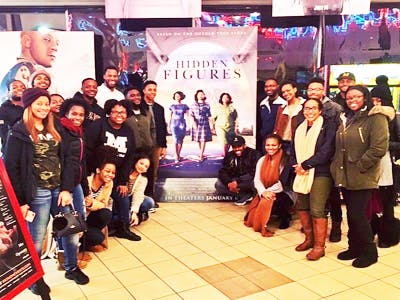 The University of Missouri chapter of the National Society of Black Engineers recently viewed “Hidden Figures” and encouraged its fellow chapters around the nation to see the STEM-based feature.

Today, having seen Hidden Figures recently, Houston counts himself among the growing number of people across the country who speak enthusiastically about the film and count it on their must-see list for a variety of reasons, even if they do not often go to see movies.

“The movie has a lot of key concepts” about life, says Houston, a 23-year-old computer science major at Jackson State University. As he echoed others voicing their thoughts about the impact of the movie, Houston ticked off a list of real-time life experiences the movie told about: race and gender discrimination and collaboration in the work place 50 years ago, individual initiative and determination, parenthood and teamwork, despite challenges at work and at home.

Houston was one of the university mentors who took more than 30 middle school boys of color to see the Hidden Figures as part of a university project funded by the Verizon Foundation to interest middle school minority males in pursuing careers in STEM (science, technology, engineering, and math). The group was joined by 13 high school girls who participate in a program put together by an African-American engineers association to boost interest in engineering among high school minority women.

“I didn’t think it would grab them,” Houston said of his mentees. “It did. We talked about what they would take away.”

The student’s trip in Jackson to see Hidden Figures was one of a variety of organized efforts around the country to bring attention to a largely overlooked page of history.

Earlier last month, hundreds of chapters of the women’s sorority, Alpha Kappa Alpha (AKA), were encouraged by their national leaders to add seeing the movie to their community service volunteer work already scheduled for Martin Luther King Jr. Day.

“I’m celebrating (the movie) but dismayed and disappointed it took 50 years for the world to know” the story, says Dr. Glenda Glover, president of Tennessee State University and first international vice president of AKA.

“It would have been an inspiration to me,” says Glover who, like the women about whom the book and movie were made, was a math major in college who had to demonstrate desire and initiative to achieve her goals in a field dominated by men, most of them White.

In addition to encouraging others to see the movie, Glover said she has personally paid for tickets for “several” young people to see the movie. She describes it as “inspirational.”

For sure, educators say, the movie is considered a surprise from Hollywood, presenting a valuable teaching supplement on film depicting a real life story absent illuminated drama.

The mixed emotions expressed by Glover were voiced by peers and others sampled across the country.

“I paid close attention to history and didn’t pick it up. I never really thought of a human being as a computer,” she hastened to add, noting she, like others who did not know of the women and their work, were speechless in seeing the story of the women’s work staged on film.

While the university has no organized viewing initiative, churches in the Delaware State area have been working to assemble organized trips to movies to see the film.

In Pennsylvania, Cheyney University officials say they are planning to send their Keystone Academy Charter School students to the movie and are exploring how to have the 20th Century Fox film brought to the campus for a showing to its entire student body.

“I took my daughters because I wanted them to learn more about their images,” said Dr. Tamika R. Bradley, the Jackson State professor in charge of the middle school minority male mentoring program.

“The same thing is true for these young me,” she says.

“We want to let them know how to shine. No color. No race. To see their cohesiveness and ability to work together,” says Bradley, associate interim dean of Jackson State’s College of Education.

Seeing the movie was the centerpiece of a day during which the boys in the program talked about STEM careers before seeing the movie and returning to their meeting rooms on the Jackson State campus for small breakout sessions. In those sessions, they discussed what they learned from the movie, Bradley says. The young people’s thoughts ran the gamut, she says.

Bradley says she was hoping to get another group of students set to see the movie soon and openly and honestly talk about what they learned. “We wanted them to feel comfortable in expressing their thoughts,” she says of the young people.

Hidden Figures, based on the book of the same name by Margot Lee Shetterly, was nominated for an Oscar, the highest honor presented by the Academy of Motion Pictures, last month.