It was as if her tragically famous father, from his Mississippi grave, was summoning Reena Evers-Everette, coaxing her to answer a soul-deepcall and mandate. So, in 2012, after spending the bulk of her adult life on the East and West Coasts, Evers-Everette re-established a permanent address in the same southern city where, as an 8-year-old, she saw her father — bullet-ravaged and bloodied — dying on the family’s carport. 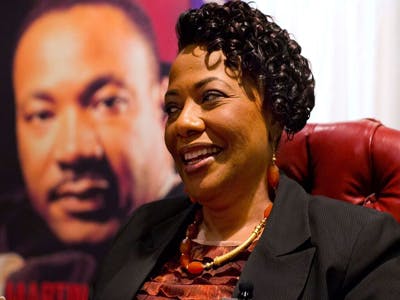 Dr. Bernice King, daughter of Dr. Martin Luther King Jr., speaks during an interview in front of an image of her father at the King Center in Atlanta.

The 1963 memory of Medgar Evers, who was the NAACP’s lead organizer in Mississippi, still haunts. It is an excruciating, endless pain for the 62-year-old Evers-Everette. Still, returning to the South wasn’t up for negotiation. “… Frankly, I was saying, in my head, ‘God, what are you doing to me? And I felt the spirit of my father coming through me: ‘You need to be home. Mississippi is home. And we’ve got some stuff to do,’” says Evers-Everette, executive director of the Jackson, Mississippi-based Medgar & Myrlie Evers Institute that her mother, Myrlie Evers-Williams, founded.

What compelled the daughter to return to the state’s capital and site of Medgar Evers’ killing was a determination to restructure what, in 2012, was a partly dormant equity- and justice-focused Evers Institute for civic engagement and training. (It’s in full-fledged expansion mode these days.)

There, too, were the tasks of spearheading 2013’s 50th anniversary commemoration of Evers’ death at the hands of Byron De La Beckwith, a White supremacist convicted of killing Medgar Evers in 1994, and of ensuring the care of her 83-year-old mom, Myrlie Evers-Williams, an activist and retired Alcorn State University distinguished scholar-in-residence still lecturing nationwide and serving the institute.

Lessons for the future

For Evers-Everette and other off spring of heralded civil and human rights leaders — slain for their particular brand of human service — building up their parents’ legacy is a conscious, if unavoidable, choice. Chief among their essential duties, they say, is telling the fuller stories of those leaders’ lives and works and displaying, in ways practical and ephemeral, how the messages of Malcolm X, the Rev. Dr. Martin Luther Jr. and Medgar Evers resonate and prove instructive in tackling some present societal challenges.

The children of these civil rights icons run name-sake organizations devoted to preserving their parents’ activist history, training youth and other up-and-comers, and serving as community meeting places where hard issues get meted out.  These adult off spring write books.  They address national and international audiences. They launch and moderate conversations such as the Beloved Community Talks that the Rev. Dr. Bernice King, Dr. King’s daughter — an author, preacher, trained lawyer and CEO of The King Center in Atlanta — kicked off on the national holiday to commemorate her father’s birthday. The talks aim to bridge a racial divide across cities, suburbs and rural America, which the 2017 U.S. presidential election has ushered glaringly into view.

These children say that, too often, their parents’ activism gets summed up in sound bites; trotted out, for example, during Black History Month or days marking the births or deaths of those globally noted citizens, whose methods and mission matter as much now as they did back then.

“For those [28 or 29] days in February, you can scream and shout all you want about what Black people have done but, subliminally, [those designated days] are a way of saying ‘You’re not worthy of inclusion in the full educational curriculum,’” says Ilyasah Shabazz, 54, the third daughter of Malcolm X and Dr. Betty Shabazz. She was just 2 years old when her father was gunned down in 1965.

Her pushback against such a constrained relaying of Black history and, more expressly, her father’s story shows in her authorship of what, thus far, has been three best-selling books. In their own way, each book angles to recast what has been incorrectly or too narrowly written about Malcolm X.

“We can’t sit back and wait for someone to do our jobs for us,” says Shabazz, who teaches, among other courses, American Cultural Pluralism and the Law at John Jay College of Criminal Justice in New York City. “Only we can write our history correctly.

“In my books, I’m very visual — because I’ve gone to many museums and seen replicas of my father as this man who looks like he’s five-foot-four when, really, he was six feet, four inches tall. It’s important that we record this ourselves.”

Shabazz infuses her classroom teaching and scholarship with the same principles that guided her father’s efforts and those of her mother, a respected educator and civil rights activist in her own right. She is especially devoted, Shabazz says, to the young people who remain her driving focus. Among other endeavors, Shabazz, a former public affairs executive for municipal governments, founded The WAKE-UP Tour, a history-based educational curriculum designed to empower youth.

“I want them to take away from that some of what my parents instilled . . . a commitment to mentoring others, to educational equality,” says Shabazz, who also sits on the board of directors of the Malcolm X & Dr. Betty Shabazz Memorial and Educational Center in Harlem. “When I teach them about the Civil Rights Movement or Black Lives Matter, it’s not just about simply discussing Black and White; it’s a matter of recognizing right from wrong and doing something about it. Otherwise, we haven’t evolved.”

Likewise, the Evers Institute’s programs include ones that target youth development. The newest, to be unveiled in mid-2017, is an 18-month-long version of what now is a one-day Evers Youth Empowerment Scholars boot camp, steeping Mississippi high school students in history and teaching them  tools of civic and community engagement and uplift. The 18-month effort will be akin, in some ways, to the Freedom Schools made prominent, starting in the summer of 1964, when Mississippi was ablaze in race-baiting and White-on-Black racial attacks.

She will impart crucial aspects of her own coming of age, including how, when she was 6, her father turned a lesson on how to distinguish between the sound of a backfiring car engine from a gunshot into child’s play. The takeaway was this: Be aware of where you are, what’s going on and respond accordingly, says Evers-Everette, one in a trio of siblings.

Mississippi State Sen. Robert Jackson serves on the institute’s board of directors.

“People of Reena’s generation, coming home to Mississippi, especially at this time, means the world,” he says. “Many people left Mississippi — and the reasons are obvious in Reena’s case — to forge a better life. Now that they’re back, they’re deeply involved in the struggle to make this an even better place to live.”

Though such involvement has an immense impact on these children personally, it also is a steady reminder of the bonus and sometimes the burden of being the offspring of their parents.

“The gift, above all, is having known my parents’ unconditional love,” Shabazz says. “It’s also knowing that we truly are brothers and sisters under the fatherhood of God … that your power, all of who you are, is limitless … ”

“I didn’t know what I would be walking back into by returning to Mississippi,” she says. “A lot of people were still sending out hateful [racist] messages. But, I tell you, when I got back to Mississippi and started working with the celebration [commemorating Evers’ life and martyrdom], I felt like I was home. I didn’t realize that was coming out of my mouth, ‘I’m home.’  Hearing that shocked a lot of people. It shocked me. But I’m so glad I’m here.”