“One of the big policy prescriptions is, ‘All we need to do to address the Black-White wage gap or minority wage gap or gender pay gaps — to a lesser extent — is to what? Improve education,’” said Dr. William M. Rodgers III, a professor of public policy and chief economist at the Heldrich Center for Workforce Development at Rutgers University, mildly mocking the notion that higher education will help end wage disparities. 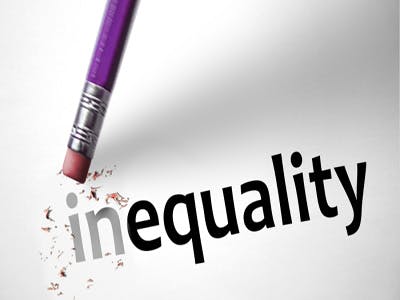 “Please don’t construe this as saying I don’t believe in pushing people on to get their B.A. or going past the B.A. That’s not the message,” Rodgers said. Rather, he said, the data shows that a bachelor’s degree is “not the silver bullet for addressing racial wage inequality.”

To bolster his point, Rodgers showed a graph that illustrated how, in the late 1970s and 1980s, Black and White college graduates “were basically at parity.”

“You see a dramatic growth in the wage gap over time in the 1980s and into the 1990s,” Rodgers said. “So this notion that we can solve the problem just by having African-Americans get their B.A.s, it helps to address some of the wage gap but it’s not the panacea. It’s not the silver bullet.”

Rodgers made his remarks recently to a group of students at the Johns Hopkins University SAIS International Economics Department during a presentation titled “Race, Education, and the Labor Market: Where Do We Go From Here?”

Invoking the “fierce urgency of now” passage from Dr. Martin Luther King Jr.’s famous 1963 “I Have a Dream” speech to draw parallels to today’s economic realities, Rodgers used a series of charts from a collaborator, the Economic Policy Institute, or EPI, to delineate racial wage gap patterns that have persisted from the late 1970s through 2015.

The adjusted rates only look at those who are employed full time, so it eliminates the disadvantage that Black men face in terms of unemployment, which reduces the amount of weeks and hours worked in a year, Rodgers explained.

While some have hypothesized that the gap is due to race-specific factors, such as rollbacks in affirmative action, part of the wage gap can be explained by race-neutral factors, such as meager raises in the minimum wage, Rodgers said.

“Since a disproportionate amount (of African-Americans) are at or slightly above the minimum wage, that’s what we call a disparate effect.”

Similarly, international trade is believed to have an adverse effect on low-skilled workers, Rodgers said.

Rodgers tied the economic and labor trends to a passage in King’s speech, in which King stated: “Now is the time to lift our nation from the quicksands of racial injustice to the solid rock of brotherhood. Now is the time to make justice a reality for all of God’s children.”

“In that segment, you start to hear the tension between racial justice, things are getting Black-specific, but also ‘all God’s children,’ we need to improve opportunity for all God’s children,” Rodgers said. “That to me says this is not just about racial justice. This is about social justice for all Americans, particularly lower- and middle- or moderate-income families.”

He said the extent to which those things relate to the 2016 election of Donald Trump are a topic for another discussion.

One of the more interesting charts that Rodgers presented showed how the Black-White wage gap in the Midwest — once the lowest in the nation at 9.2 percent in 1980 — began to approach the size of the gap in the South, which has never been lower than 15 percent since 1980.

Rodgers attributed the growth in the gap in the Midwest to the decline in unions and the erosion of manufacturing, which he said affects all workers but had a disproportionately adverse effect on African-Americans.

Instead of a race to the top, Rodgers said, there was more of a “race to the bottom in terms of labor and resources type of policies. The Black-White gap moved closer to what it is in the South.”

“What we mean by that is that, during this period of time there might have been a growing gap in educational differences between Blacks and Whites, that the average amount of education that Whites had grown more than the average amount that Blacks had,” Rodgers said of the first observable difference.

The other observable difference is the “price at which education is valued in the labor market expanded.”

“Since Whites have more education and the value of that education grew,” Rodgers said, that could explain the Black-White wage gap.

But he said the bigger reasons are the “unobservables” of discrimination and the role of international trade.

Rodgers recommended a series of “broad-based economic policies to raise wages with larger gains for African-Americans.”

Among other things, they included raising the federal minimum wage and “rigorously enforcing wage laws aimed at preventing wage theft.”

Rodgers also recommended consistent enforcement of anti-discrimination laws in the hiring, promotion, and pay of women and minority workers, and doing more to identify the “unobservable measures” that impact the Black-White wage gap.

He also suggested a “high-level summit to address why Black college graduates start their careers with a sizable earnings disadvantage.”