After graduating from John F. Kennedy High School in Cleveland, Ohio, Nina Turner took a number of minimum-wage jobs, as did many young people in her neighborhood. The oldest of seven children, Turner was more interested in helping her single mother pay the bills than in advancing her education.

But, it was one nudge from her mother that changed everything: “You’re so smart. You need to go to college,” she recalls her mother’s words in a recent interview with Diverse. 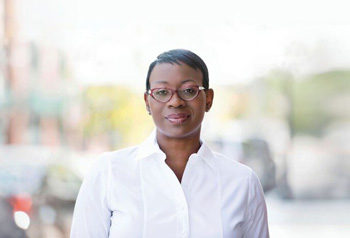 Turner enrolled in Cuyahoga Community College, although she initially felt overwhelmed and dropped out. Later, remembering her mother’s encouragement, Turner re-enrolled with guidance from one of the school’s counselors.

From that point on, she soared, making the dean’s list, editing the school paper, getting involved in student issues, and, within a few years, Turner had earned her associate degree plus bachelor’s and master’s degrees from nearby Cleveland State University.

The challenges that Turner faced along the way would have halted a less-determined person. Her mother died unexpectedly at age 42, leaving Turner, who was then a 22-year-old sophomore at Cuyahoga Community College, and her police officer husband Jeffery, the task of caring for her six siblings and their own child, Jeffery Jr.

“It was really tough, a huge obstacle for my family,” she recalls, “because my mother wasn’t sick; she died of an aneurism without a life insurance policy and with no money in the bank.”

She credits Tri-C — as Cuyahoga is known — as well as her husband’s strength and support with keeping her on track. “If it were not for that community college, I would not have a degree,” Turner says. “There were so many professors there [who] took me under their wing. That’s the real mission of community colleges.”

She singles out Dr. Dorothy Salem as a key figure in her life and the lives of numerous Tri-C students. “I remember walking into her classroom and stopping to look at my schedule. Then I looked at her and kept looking down at my schedule,” Turner remarks, noting that her African-American history professor was White.

As it turned out, Salem would have a significant impact on her career. “She actually changed my life and the lives of other students by teaching us how valuable the contributions of African-Americans were to the making of this country,” says Turner, whose personal hero is the late Black New York congresswoman and presidential candidate Shirley Chisholm, whose famous motto, Unbought and Unbossed, was the title of her autobiography.

So, too, Turner has stood up to party bosses and critics within the Democratic establishment for her unwavering dedication to Vermont Sen. Bernie Sanders after initially supporting Hillary Clinton for the nomination.

“What I have continued to admire about Nina is that she does what her conscience dictates,” Salem tells Diverse. “I didn’t know she would become a national figure, but I saw someone who had a great deal of potential and someone who would follow through on opportunities that were available.”

Turner says those opportunities — internships and fellowships made available through the college — combined with academics, led to her career in public service. Today Turner, a tenured assistant professor of history at Tri-C, became widely known as a fiery representative for Sanders’ presidential campaign and a board member of his progressive movement, Our Revolution. She is a frequent pundit on political news shows and a highly sought-after speaker at high schools and colleges throughout the nation.

Turner honed her political acumen with mentors from the top echelons of state and local government. Before serving as a state senator and minority whip, Turner worked as an aide to former Cleveland Mayor Michael White, and later as a member of his cabinet. She was later elected to the Cleveland City Council, undeterred after an unsuccessful first bid for the seat. Most recently, she ran as the Democratic candidate for Ohio Secretary of State in 2014.

As she rose to positions of influence in government, Turner was drawn to academia as a way to relate directly to young people, many of whom came from backgrounds similar to hers. Again, it was Salem who gave her a push. “It was in the late ’90s when I was working in the mayor’s office, and I received a phone call from her. She said, ‘You were born to teach and I cannot retire until you come here and teach.’”

“When she went into politics, Nina promised me (she) would never forget where she came from, and she never has,” Salem recalls. “I’m very proud of her.”

After her grueling schedule of appearances in the 2016 presidential campaign, Turner says teaching and speaking to high school and college students is equally satisfying. However, media outlets in her state have her high on a list of future candidates. In December, the Cleveland Plain Dealer reported that Sanders supporters had launched a group called “Turn Ohio Around” to draft Turner as a candidate for governor in 2018.