Tracy K. Smith, the director of Creative Writing and the Roger S. Berlind Professor of the Humanities at Princeton University, has been named the nation’s 22nd Poet Laureate Consultant in Poetry for 2017-2018.

Smith, a Pulitzer Prize-winning poet, succeeds Juan Felipe Herrera as poet laureate, and will be Carla Hayden’s first appointment as the Librarian of Congress. 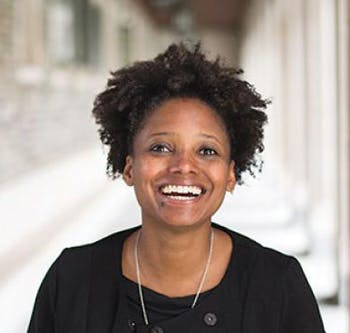 “I am profoundly honored,” Smith said upon news of her appointment earlier this week. “As someone who has been sustained by poems and poets, I understand the powerful and necessary role poetry can play in sustaining a rich inner life and fostering a mindful, empathic and resourceful culture. I am eager to share the good news of poetry with readers and future readers across this marvelously diverse country.”

Hayden said Smith “brings history and memory to life” and was an “attractive choice” for the national honor because the Princeton professor wants to make poetry and the library “accessible and relatable to people all across the country,” Hayden said.

“With directness and deftness, she contends with the heavens or plumbs our inner depths—all to better understand what makes us most human,” Hayden said of Smith.

Dr. Donna Akiba Harper, the Fuller E. Callaway Professor of English at Spelman College, told Diverse that she was thrilled about Smith’s appointment. “She follows in the footsteps of other amazing Black women poets—dating back to Gwendolyn Brooks when the appointment was not yet called poet laureate. Certainly Rita Dove and Natasha Trethewey also have demonstrated how to bring light and power to the poetry of Black women.”

As an African-American poet, Smith seems to be a fitting choice for today’s political and cultural climate given her embrace of diversity and her vision for her role as the nation’s poet.

“Poetry can help us make sense of the contemporary moment,” Smith said in an interview with The Washington Post. “I’m excited by the fact that what poets are writing speaks to a particular moment and it speaks to the ages. Any political moment is uncertain, and a voice that lets us think about that will last. Let’s think about how empathy can drive our perspective of one another. Let’s think about how we can get past what’s binary and simplest to what’s complicated.”

Dr. Eddie S. Glaude, Jr., one of Smith’s colleagues at Princeton, commended her for this national accomplishment. “I am so delighted,” Glaude, chair of the Department of African American Studies, told Diverse. “What a wonderful burst of sunshine in these dark times.”

Smith is the author of three books of poetry including Life on Mars (2011), winner of the 2012 Pulitzer Prize for Poetry; Duende (2007), winner of the 2006 James Laughlin Award and the 2008 Essence Literary Award; and The Body’s Question (2003), winner of the Cave Canem Poetry Prize. She has also been awarded the 2014 Academy of American Poets Fellowship, a Rona Jaffe Award, a Whiting Award, and a Columbia University Medal for Excellence in 2016.

Her memoir, Ordinary Light, was also a finalist for the 2015 National Book Award in nonfiction and details the poet’s early love of poetry, meter, and style.

The newly appointed poet laureate’s collections of poetry have included themes of joy, loss, family, identity, and empathy. Scholars and poets praise her range of poetic ability. Most notably, her prize-winning collection, Life on Mars, explores science fiction and her father’s experiences as an engineer on the Hubble Space Telescope.

With a love of poetry spanning more than 30 years, Smith depicts everyday moments in her works and parallels them with larger themes applicable to other people. Poems “connect us more fully to our own inner lives and to the lives of others,” she says.

This fall, Smith will begin her duties as poet laureate reading from her collection of works at the opening of the Library of Congress’ annual literary season at the Coolidge Auditorium.

Smith’s collection, Wade in the Water, will be published in April.