The president of Paul Quinn College in Dallas was recognized for his ability to turn the historically Black college around  since taking the helm in 2007. 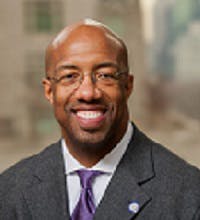 “Sorrell quickly set about challenging perceptions, both external and internal, by giving Paul Quinn a bigger vision of itself,” the magazine noted. “Under his leadership, the football field was turned into a farm. He solicited the school’s first-ever seven-figure gift from a donor and used it to raze that campus blight, and he emphasized the recruitment of students from out of state to expand what’s now a 500-plus-member student body.”

As the leader of the nation’s first urban workforce college, Sorrell said that he is humbled and honored to be recognized by an international publication alongside Bill and Melinda Gates, South Korea’s president Moon Jae-in and media titan Oprah Winfrey.

“I was so honored and shocked, quite frankly,” said Sorrell in an interview with Diverse.  “I don’t do these things looking for personal attention.”

Still, the recognition is likely to catapult Sorrell and Paul Quinn at a time when the college is about to launch its first capital campaign in the school’s history and will announce plans this summer to open a campus outside of Dallas.

“We are now a part of a global conversation,” said Sorrell, adding that his institution is committed to solving some of the major problems of the day. “We are literally teaching students to solve the problems of their lives.”

Sorrell said that although he’s on the list, the recognition is a team effort.

“This was made possible because of the work that we do at Paul Quinn College, a school that less than 10 years ago, people left for dead,” said Sorrell. “Let’s be clear. This is the Lord. It shows you what is possible. We knew it was possible but now others see that it’s possible.”