On a Friday morning late last spring, bell hooks was sitting comfortably on a couch perfectly situated in a spacious single-family home that Berea College purchased and had since converted into an Institute bearing her name.

On this particular day, hooks — arguably one of the nation’s most prominent authors and feminist scholars — was interested in talking legacy — hers and other Black writers.

­That was the impetus for the creation of the bell hooks Institute, which was founded in 2014 by hooks and headquartered at Berea — the small liberal arts work college where no student pays tuition.

“I was seeing that so many individual Black writers and thinkers were dying without having protected their legacy,” says hooks, who is the author of numerous books including Ain’t I a Woman: Black Women and Feminism and Feminist ­Theory: From Margin to Center. “Sometimes as African-Americans we exist in a kind of schizophrenia. We know that imperialist White supremacist, capitalist, patriarchy is real but then we think, ‘If we just follow the rules, we’ll succeed.’”

hooks, who is close friends with feminist activist Gloria Steinem, says that she watched how so many worked across the years to safeguard Steinem’s legacy, but “when I looked around, especially for Black women writers, that’s not the case.”

For hooks, legacy is not the same as an archive, although both are critically important.

“I was discouraged because other Black women said to me, ‘You don’t need an Institute, you don’t know what you’re doing,” says hooks. “And I was really shocked, not to get the support but I think that’s the schizophrenia that we live within. People act like, “Well, your books will be around.’ You can’t count on this White racist world to keep anything of ours with the care and the commitment that we would like for it to have.” 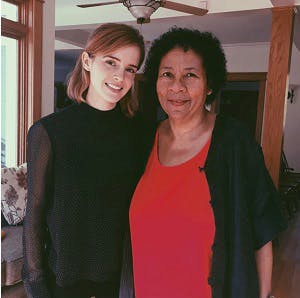 ­That spirit of self-determination has been a guiding force for hooks who has turned the institute into a place where locals can engage in discussion about a variety of present-day issues.

“People don’t realize that attending a lecture at a university is a very class-based phenomenon,” says hooks. “­There are people who come to this institute who would never come to a lecture on campus because it feels accessible, it feels present.”

Because of who she is, hooks has been able to attract high-profile scholars such as Dr. Cornel West and Laverne Cox, the transgender actress and LGBTQ advocate.

“She’s a big bell hooks reader,” says hooks about the star who rose to prominence for her role as Sophia Burset on the Netflix series “Orange is the New Black.”

“And of course, I was like ‘Who the hell is Emma Watson?’” hooks recalls with a laugh. “But we went to lunch and we connected and she came here and this is a gift.”

For hooks — who does not use the Internet and continues to read a book every day — the Institute has been the gathering place where students and everyday people can engage in intimate conversations with some of the nation’s most celebrated thought leaders.

Such was the case for Fred Baker — who students, faculty and staff affectionately call “Mr. Fred.”

After retiring from IBM/Lexmark in 2008, Baker began working at Boone Tavern, the local hotel owned by Berea College.

“Fred has just been a faithful and loyal worker here and so when Cornel West came, I was like, ‘You have to talk to Fred.’”

­The opportunity to engage in a dialogue with West was life transforming for Baker.

“Fred just kind of wept,” remembers hooks. “Never in his wildest dreams, did he think he would have one-on-one time with Cornel West.”

hooks — who coauthored Breaking Bread: Insurgent Black Intellectual Life with West — has shared a long friendship with the philosopher stretching back to their days as faculty members at Yale.

“I learned a lot about being gracious from Cornel because he takes the time,” says hooks. “And sometimes it’s annoying because it’s like, ‘Come on, Cornel.’ But he has a big open heart.”

West’s criticism of President Obama across the years has hurt his cause, says hooks.

“Unfortunately, I do think Cornel went too far in his obsessive critique of Obama, and that makes me sad because he ended up losing esteem in so many people’s eyes. And was it worth it?”

Aft­er a storied career teaching at some of the nation’s most established institutions, hooks — who was born Gloria Jean Watkins and later took the pen name bell hooks from her great grandmother Bell Blair Hooks — decided to return to Kentucky to be closer to her parents. 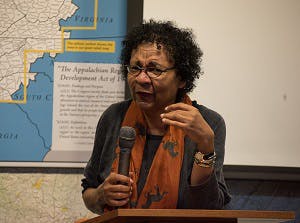 bell hooks speaking at an event.

“Our parents were really aging and it was clear that they were not going to be around for many more years, and I wanted to be near them,” says hooks, who is one of seven children.

A­fter a talk at Berea College, she fell in love with the institution and the students that it serves.

“I felt very much that I wanted to give back to the world I came from,” she says. “I grew up in the hills of Kentucky and I wanted these students to see you can be a cosmopolitan person of the world but still be connected positively to your home roots.”

Now a Distinguished Professor in Residence in Appalachian Studies, hooks says that Berea College provides her with the opportunity to pursue her interests.

“Part of what Berea has offered me through wonderful administrators is the freedom to be as I am, to think as I want, to have this space,” she says of the institute, which she raises funds to support.

That fierce independence, she notes, is not common in everyday society.

“I think that on some level, we’ve all been diminished by academic institutions becoming where we’re housed,” she says.

“I think about the magic and energy of a [James] Baldwin, but Baldwin was never housed in an institution. But all of our thinkers that are deemed important and valuable are at institutions.”

She continues: “I think it does something to how you think to be institutionalized because the Bible says, ‘The servant cannot serve two masters.’ Because once we become institutionalized, we are committed to serving a master and then in our intellectual work and imagination, we are working to serve that and it’s hard.”

Earlier this year, hooks was inducted into the Kentucky Writers Hall of Fame, a recent highlight of her fascinating career.

“People don’t want to remember the racial apartheid that really was a significant aspect of Kentucky’s history,” she marvels when she thinks about the honor. “The town that I grew up in was completely segregated with White people ruling and on top.”

And there was fear, she says, “like a low-level fever.”

“As Black girls we knew there were White men who came into our communities as sexual predators and there were a whole set of instructions our mother would give us like, ‘if he says come over to his car, don’t go,’” hooks recalls. “And I think that level of racial assault was so normalized for our parents that the idea that it was actually impacting us psychologically was not clear to people 50 and 60 years ago.”

An earlier pioneer in Black feminism, hooks says that she is profoundly worried about the direction of the feminist movement.

“I don’t know where we are,” she says. “I feel like we’ve gone in a negative direction in thinking that feminism is about women against men; that thinking it’s only about issues having to do with sexuality and not that it’s really about a larger framework of self-actualization.

For hooks, “White supremacy trumps feminism,” but in the age of social media she says that comments made by scholars are “so distorted and personalized” as was the case when she gave a talk about the slave trafficking of Black girls and referenced Beyoncé who she said was like a terrorist.

“People did not contextualize my comments and just flew with the comment and I became the enemy,” she says. “People would say, ‘You hate Bey?’ and I would say, ‘Honey, I don’t know Bey. I am a critical thinker and that’s what I do.”

In an interview with Diverse, West says that hooks is “a giant who will be appreciated even more as the culture catches up with her.”

Berea College’s president Dr. Lyle D. Roelofs says that hooks has been a welcome addition to the college founded in 1855.

“We are so fortunate that bell hooks has chosen to join us in Berea, to create the bell hooks Institute as a companion to Berea College and to house her papers with us,” says Roelofs. “Her rigorous, innovative and critical thought are as inspirational to the intellectual enterprise of our school as they are affirming to our mission of social justice. Acting as a magnet for other great scholars and social commentators, they come from near and far, enriching our school, our town, and the entire region with their presence.”

At 66, hooks — who never married and never had children – is still engaged in enterprising scholarship.

But she is also comforted in being close to her sister — Dr. Valeria Watkins — who is also on the faculty at Berea and returning to her native Kentucky.

“I tell people I’ll be living in Berea until I die,” she says. This is my home.”

These days, she thinks a lot about her parents. Her father was a custodian and her mother, a homemaker, who wanted the best for their children.

“I think that it was hard for them,” hooks says. “Like so many families we were dysfunctional in ways, but there was a deep commitment to each of us and our growth.”

hooks, who attended Stanford University and later earned a Ph.D. from the University of California Santa Cruz says that being back in Kentucky has felt like home.

“These hills I come from that’s allowed me to become and emerge as bell hooks, my great-grandmother’s name as my own calling card is pretty amazing,” she says. “And that’s what Berea College offers these students — the opportunity to self-develop, to self-actualize and not be stigmatized.”

This article appeared in the November 1, 2018 edition of Diverse.