WASHINGTON – Voting rights, education, health care, economic uplift and criminal justice reform are key legislative policy issues that the public should support as a new Congress is seated in January, according to speakers and panelists at the legislative and policy conference hosted by the National Action Network.

The two-day gathering at the Russell Senate Office Building, which began on the first day that Congress reconvened following the national midterm, is the first such event by a national civil rights group post-election. A laundry list of senators and representatives – Bernie Sanders, Cory Booker, Benjamin Cardin, Frederica Wilson and Joyce Beatty, to name a few – are scheduled to take up issues of education, immigration, homeland security and the first 100 days of the 116th Congress on Wednesday. 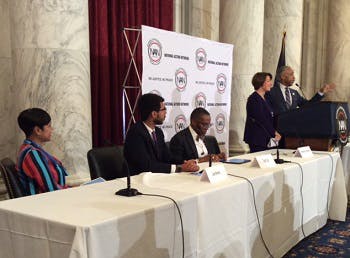 Organizers and guest speakers called on the more than 300 attendees Tuesday morning to follow up voting with support for policy initiatives on the horizon that help their communities. Attendees also were urged to visit the offices of lawmakers on both sides of the aisle – time was built into the conference schedule to do so – to let them know the policy matters and legislative initiatives that are important to the public, and to hold them accountable when it’s time to vote on legislation.

“Our determination is that we want senators and members of Congress to lay out where they see us going in the next 100 days,” the Rev. Al Sharpton, founder and president of NAN, told the gathering. “We cannot keep telling people in our communities to come out and vote and we don’t know the agenda and what is going to be accomplished. All this beltway politics does not work on Main Street or Martin Luther King Boulevard.”

“You all are right on time,” Rep. Eleanor Holmes Norton, D-D.C. told a packed room in opening remarks. “You are in time for members of Congress to hear your advice and your counsel and your advocacy.”

Norton said she believes the incoming Congress will be the one that finally helps the District of Columbia gain statehood, and her a vote on the House floor on behalf of its 700,000 residents. She urged attendees to be vocal and active in promoting policies and holding lawmakers accountable, sounding a common theme.

“We’re seeing a systematic effort by this administration to take us backwards,” she said, citing changes that made it easier to purge voter rolls and other practices that she and several speakers described as voter-suppression tactics in some areas that particularly disenfranchise Blacks, Hispanics and Native Americans living on tribal lands.

“When we collectively vote in large numbers, we can make a difference,” Sewell said. “We have to make sure that we put the teeth back into the voting rights act of 1965 … and we need your help.”

Speakers also stressed the importance of participating in the upcoming U.S. Census because the numbers directly influence representation in Congress and allocation of federal financial resources.

Voting, redistricting and the 2020 Census were the focus of a panel discussion moderated by Tiffany Cross, co-founder and managing editor of the political diversity blog, The Beat DC.

“Considering everything Democrats had going against them, Tuesday was exceptional,” said Jose Morales of the National Democratic Redistricting Committee, calling Republican gerrymandering a form of voter suppression.

Panelists and speakers praised the diversity of new legislators who will be taking office, with Native Americans, Muslims, LGBTQ candidates and a record number of winning female candidates making history.

She called on voters to engage lawmakers about diversity on their staffs, noting that only one lawmaker outside of the members of the Congressional Black Caucus has a Black chief of staff.

“Ask legislators, ‘What does your staff look like?’” Foxx suggested.

It’s important to get acquainted and develop relationships with lawmakers’ staff members because they have influence, and some know the institutions and the ins and outs of government better than the lawmakers themselves, said David Johns, executive director of the National Black Justice Coalition.

Johns urged attendees to include in their advocacy people who find themselves at the intersections of various identities, and to seek to influence legislators on both sides of the aisle, which may mean getting outside of a personal comfort zone.

Warren said the midterm election results, in which Democrats took control of the House, signaled that “America put the power back in the hands of the people.” Talking about policies and good ideas is nice, she said, “but at the end of the day, it’s action we need. And we need it now.”

“The system is still rigged in favor of the wealthy and powerful,” Warren said, citing top legislative priorities as health care, voting rights, home affordability and ownership, criminal justice, protecting Social Security and Medicare and gun safety. “We have our work cut out for us.”