An announcement by the Southern Association of Colleges and Schools Commission on Colleges (SACSCOC) to remove Bennett College from membership this week has not stopped the all-women’s historically Black college (HBCU) from fighting for its survival. 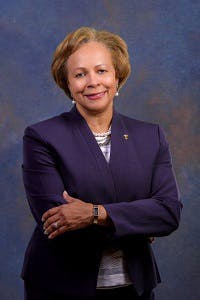 The small, private college in Greensboro has appealed the SACSCOC decision, which follows a two-year probationary period brought on by financial instability and declining enrollment. Bennett president Dr. Phyllis Worthy Dawkins will attend a formal hearing on February 18 to make a case to restore the college’s accreditation.

The college will retain its accreditation throughout the appeal process.

“While we did not get the news we wanted today from SACSCOC officials, I remain optimistic that Bennett will make the necessary strides to demonstrate we deserve to remain accredited,” Dawkins said in a statement Tuesday. “Bennett College is one of only two all-women’s HBCUs in the country and has produced outstanding alumnae who have become national leaders in various fields.”

SACSCOC initially placed Bennett on probation in 2016, and extended it for another year in 2017 for non-compliance around standards for financial resources and financial stability.

Declining enrollment beginning around 2010 factored into the college’s financial challenges. Bennett’s enrollment dropped from 780 students in 2010 to nearly 400 in 2017.

This year, the college is making strides towards financial stability, and reported a surplus of $461,038 with no audit findings during fiscal year 2018. Bennett has increased fundraising from $3.37 million to $4.25 million over three years, a press release said, and leaders have seen a 15 percent increase in enrollment since last year.

Officials said Dawkins and Bennett’s board of trustees will continue “aggressive” efforts to demonstrate financial stability and increase fundraising, according to the news release.

“The growth and development of our students motivates us to continue our transformative work,” Dawkins said. “Our new students came in this fall with an average GPA of 3.2, and we are determined to do everything we can to graduate phenomenal women leaders.”

A loss of accreditation can be devastating for institutions, as they are no longer eligible to receive federal funding for students who rely on financial aid to attend. Moreover, some employers or graduate schools will not accept degrees from unaccredited schools.

Dr. Belle S. Wheelan, president of SACSCOC, said the decision to remove Bennett from membership at the accrediting body’s annual meeting did not come lightly.

“They’ve been on probation for two years,” she said, adding that they could not “dig themselves out.”

Brooke Kane, this year’s Miss Bennett College, said, in part, on Twitter, “To all my other HBCU brothers and sisters, please pray for Bennett College as we go through this dark time.”

Dr. Karla F.C. Holloway, the James B. Duke Professor of English at Duke University, added that the “Bennett Belle” tradition is a “crucial” aspect of her novel in progress, Gone Missing in Harlem.

“Heartsick that the critical legacies of this college are threatened. @BennettCollege #HBCUs #StandWithBennett,” she said on Twitter.

She added that unless small, private schools begin to think of diversifying their enrollment base – for example, recruiting beyond recent high school graduates – or make cuts to academic programming, more of them will struggle “terribly” or merge with other institutions.

Similar private institutions such as Paine College, Morris Brown College and Knoxville College have fought their own battles to regain accreditation over the last few years by working to increase enrollment, streamlining academic programming and budget priorities and executing fundraising campaigns.

Dr. Robert T. Palmer, associate professor in the Department of Educational Leadership and Policy Studies at Howard University, had similar observations as Wheelan.

He suggested that institutions like Bennett can work on innovative marketing campaigns to recruit students, work collaboratively with other HBCUs in the region around cost-saving measures, and continue to engage alumni for financial support, which Bennett has been doing, he said.

Particularly, small HBCUs can try to engage more in online education to increase revenue, Palmer added, saying there are a number of students who would love to receive an HBCU education, but may have to work full-time.

“That’s an area that we need to be more intentional about encouraging more online programming,” he said. “That revenue can be used for scholarships, infrastructure, to recruit talented faculty, for a host of measures.”

Like St. Augustine’s University and Johnson C. Smith University, who recently received notice that they were removed from probation by SACSCOC, there is still hope for Bennett, Palmer said. “It doesn’t look promising, but there’s still hope. Hope always prevails.”

Although Bennett is not a Thurgood Marshall College Fund (TMCF) member institution, David Sheppard, senior vice president, general counsel and chief and staff at TMCF, offered several options that Bennett and other small HBCUs might consider to ensure sustainability.

Bennett officials could consider having students take early-level courses at neighboring institutions and higher-level courses at Bennett, Sheppard said, or the college could focus on cultivating a specific area of specialization.

Further, institutions could bring in revenue by partnering with corporate partners around developing curriculum and training the workforce for industry partners, Sheppard continued.

Palmer and Sheppard also highlighted an opportunity for HBCUs to increasingly recruit non-Black students, even as there has been some pushback on this idea, Palmer said.

“Even though we’re HBCUs, we have a history of being a vehicle of opportunity for people regardless of background,” Sheppard added.

For now, President Dawkins is calling on donors to support the college leading up to the February hearing about its accreditation.

“People care about Bennett,” Dawkins said. “They are asking what they can do. We need your donations and connections for unrestricted funding. We have 45 days. This is a call to action for those willing to stand with Bennett.”