Dr. Theophilus “Theo” Fowles utilizes his love of technology to get people to engage with one another.

“I’m always looking at how organizations and communities grow in online spaces and how the impact is received in real life,” says Fowles, a first-generation college graduate who has experience working with nonprofits and in K-12 and higher education environments.

Fowles, who is currently the center supervisor at the University of Southern California (USC) Center for Black Cultural and Student Affairs (CBCSA), didn’t always intend to work in academia. As an undergraduate at USC, he majored in critical studies of film and later taught high school English and film studies in New York City. It was as a school teacher that his passion for instruction grew.

A large part of what he now does at USC focuses on building and launching cultural program initiatives. In the process, he manages most of CBCSA’s digital platforms like Facebook and Instagram and focuses on “making sure that prospective students as well as current students are aware of what’s going on in our spaces.”

“If we can really engage people and students where they are, which is online, we can make their in-person experiences on campus better,” says Fowles, who focused his dissertation on how former foster youth now understand higher education institutions using social media outlets. “I think it takes a lot of scholarship to really engage with the communities and be reactive and supportive and sometimes proactive to what you see online as well, which I think is important given our climate.” 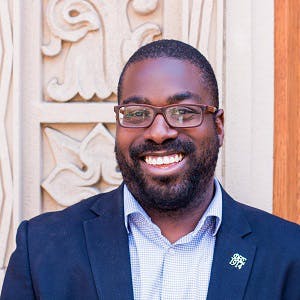 Launched in 1977, the Center for Black Cultural and Student Affairs at USC serves as a student support system and safe space for students of all backgrounds, says Fowles.

Being able to share student success stories, to encourage students and show them their individual progress from the beginning of the semester to the end and from the start of their freshman year to graduation, gives Fowles “warm, fuzzy feelings” in his ongoing effort to bring the college community together.

Fowles, who was initiated in the Nu Upsilon chapter of Phi Beta Sigma while an undergraduate at USC, also works as an adviser for Brothers Breaking B.R.E.A.D., a Black male collective on campus that was launched three years ago by students in a group chat as a safe space. The organization’s mission is to break barriers, regrets, egos, animosities and doubts within the Black male spectrum at USC.

Brothers Breaking B.R.E.A.D. meets bi-weekly on-campus and, though it is geared toward Black males, Fowles says it does have a diverse membership, with over 400 students from various backgrounds as members.

The group utilizes its student staff as liaisons to attract different types of students through group chats to talk and engage about critical issues that impact the campus community and beyond.

Dr. Rosalind Conerly, director of CBCSA, says that since Fowles has previous experience teaching in a K-12 environment, he offers a “unique perspective” to their ongoing work.

“He has the ability to relate to students on a personal level by sharing his experiences and also challenging them to use their resources that they have access to at USC,” says Conerly. “He created an informal network of ages 40 and under Black staff and faculty at our institution to create community and bring people together, which speaks to his love for connecting people.”

Conerly says that she sees Fowles as her “right hand” and someone who helps to implement the goals for the center.

“I see him as a partner that is also a leader in the center,” she says. “He brings a balance to my role in the space. To me, he is an example of being able to gain experiences in different industries but also has been able to keep true to his passion for education,” she adds.

Though he does not currently teach, Fowles has aspirations of teaching an online class at USC in the future.

Reflecting on his work and engagement with undergraduate and graduate students in-person and online, Fowles says his effort of bringing people together through curating on-campus resources and off-campus opportunities is mainly to help shape our own stories and share them with a larger audience, so it can then go beyond the firewalls of CBCSA.

A Chicago native, Fowles says he enjoys working at the CBCSA because it reminds him of when he was in students’ shoes on campus.

“I actually used this center myself. So I was the student who was on the couches and eating the snacks and using the computer lab, so I see myself in the students every day and it just continues to motivate me to help them have a really great experience as well,” he says.