U.S. Secretary of Education Betsy DeVos has given a personal donation to the Thurgood Marshall College Fund (TMCF) from her annual salary, the organization recently announced. 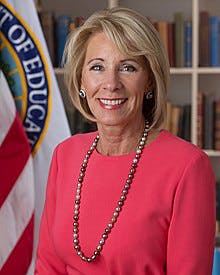 After she first began her role as Secretary of Education, DeVos promised to donate her yearly salary to charity. In 2018, she donated the remainder of her salary to education and special needs charities.

DeVos’ donation to TMCF will be used to help the organization continue working to educate the next generation of leaders from publicly supported historically Black colleges and universities (HBCUs) and predominantly Black institutions across the country, according to a TMCF release.

“Out of all the higher education organizations in the country she could have selected, we can’t thank Mrs. DeVos enough for her trust, belief in and support for TMCF, the mission and our 47 member-schools,” said Dr. Harry L. Williams, president & CEO of TMCF. “Mrs. DeVos has taken the time to consistently meet, listen and work with TMCF, learning more about the needs and value of our schools throughout her time at the Department of Education. We have had a productive and impactful working relationship with Mrs. DeVos and her entire team.”