There are opportunities for educators and policymakers to improve African-American and Hispanic males’ employment attainment by implementing practices and policies that drive the underrepresented group’s educational persistence and completion, according to new data from the Charles H. Houston Center for the Study of the Black Experience in Education at Clemson University. 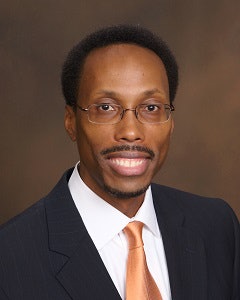 The center’s new infographic “Employment Status by Educational Attainment among African American and Hispanic Males” reveals that Black and Hispanic males who earn a bachelor’s degree or higher hold an employment-population ratio of 77.3 percent and 83.7 percent, respectively. Of those who only have a high school diploma and no college, Black males had an employment-population ratio of 59.7 percent, while Hispanic males had a ratio of 78.2 percent, the infographic shows.

“It is important to note that we have to continue to assess the extent to which educational attainment leads to labor market outcomes as well as produce scholarship that generates solutions to issues pertaining to the relationship between educational attainment and employment outcomes among African-American males, Hispanic males and other underrepresented populations,” said Dr. Lamont A. Flowers, executive director of the Charles H. Houston Center for the Study of the Black Experience in Education and Distinguished Professor of Educational Leadership at Clemson.

The latest data analysis is part of a wider effort at the Charles H. Houston Center to conduct research and disseminate information to inform programming and policies in South Carolina and nationally that reduces racial disparities in education and promotes student success.

In addition to the employment status findings for Black and Hispanic male high school and college graduates, the center found that the employment-population ratio for those without a high school diploma is 73.3 percent for Hispanic males and 36.2 percent for Black males. The latter statistic is one Flowers found “particularly interesting” because it is less than half the employment-population ratio of Black males with bachelor’s degrees or higher. 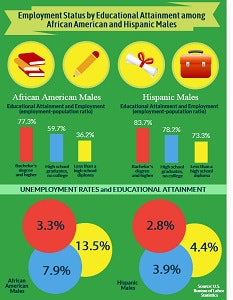 Source: Charles H. Houston Center for the Study of the Black Experience in Education at Clemson University.

Data also showed that Hispanic males had higher employment rates at all educational attainment levels than their Black counterparts.

“In light of the data indicating that Hispanic males had more favorable employment outcomes, it suggests that factors other than educational attainment play a role in employment status,” Flowers said. “Additional research is needed to examine these and related issues.”

One possible reason for this finding may be the concentration of Hispanic workers in the labor force, particularly in occupations that “require less education and where wage growth is slowest,” according to a report on Latino education and economic progress from the Georgetown University Center on Education and the Workforce.

However, Hispanic workers are underrepresented in well-paying jobs that require a bachelor’s degree or higher, the report pointed out.

Other center findings include:

-The unemployment rate for Hispanic and Black males with bachelor’s degree was 2.8 percent and 3.3 percent, respectively;

-The unemployment rate for Hispanic and Black male high school graduates was 3.9 percent and 7.9 percent, respectively;

-The unemployment rate for Hispanic and Black males with less than a high school diploma was 4.4 percent and 13.5 percent, respectively.

Flowers said that the descriptive analysis – based on race and labor market information from the U.S. Bureau of Labor Statistics – shows that higher levels of education results in higher rates of employment. He added that the infographic findings can be beneficial for leaders to identify “a myriad of success factors” for Black and Hispanic males as they transition from academia to their careers.

Identifying additional success factors, programs and policies for Black and Hispanic male success will be the topic of this week’s annual Men of Color National Summit at Clemson University.

The summit will explore opportunities and solutions to close the achievement gap for African American and Hispanic males, bringing together thousands of high school and college students, educators, community and business leaders, government officials and more.