As Dr. Henry N. Tisdale ends a quarter-century at the helm of Claflin University, he finishes the race with a track record that makes him one of the most transformational college presidents of his time. 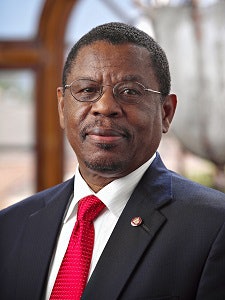 Asked what he would select as preeminent among a lengthy list of Claflin advances during his 25 years as president, Tisdale references third-party rankings as a top HBCU and a premier liberal arts institution.

“I think that my most significant achievement was repositioning the university as one of America’s best colleges,” says Tisdale, a 1965 Claflin honor graduate.

His leadership meant immediate and consistent progress toward his vision of creating plans for increasing enrollment and enhancing academic excellence, establishing strong strategic planning and fiscal processes, and reaffirming the school’s Christian tradition.

Within months of arriving as Claflin’s eighth president in 1994, Tisdale announced the creation of the Center for Excellence in Science and Mathematics. Before the year ended, Claflin established the Alice Carson Tisdale Honors College.

His biggest challenge faced him when he arrived – making the school’s budget match its huge vision to be a preeminent school in the southeast.

“We wanted to be the best among the best, but our resources didn’t say that,” he recalls.

It would take money to competitively recruit the best faculty and to attract some of the best and brightest students for a heterogeneous student body, he says.

“The physical plant was not where we wanted it to be,” he adds, “so getting the resources to transform it [was a priority] so that it would create an environment that would be appealing to students and parents and supportive of academic excellence.”

The nation’s recession and a Parent Plus loan fiasco compounded the challenge, but board members and alumni stepped up as leaders in fundraising efforts, says Tisdale.

Through it all, enhancements to academic programs and facilities were nonstop.

The Freshman College launched in 1996, and the Professional and Continuing Studies Center and Leadership Development Center were introduced in 1997. The following year, the Living and Learning Center complex opened its doors.

A new music center opened in 2004 – along with a Student Residential Center with dining facilities – and the new James and Dorothy Z. Elmore Chapel was consecrated in 2007.

Among many renovation and restoration projects were Tingley Memorial Hall, H.V. Manning Library and Ministers’ Hall, which was restored and turned into a performing arts facility with the auditorium named in honor of South Carolina Supreme Court chief justice and Claflin alumnus Ernest A. Finney, Jr.

By 2008, more than $50 million had been invested in improvements and Claflin’s enrollment and campus size had doubled. With eight in 10 faculty holding terminal degrees in their fields and a student-faculty ratio of 12:1, Claflin won a Forbes.com designation that year as the nation’s top HBCU and was ranked in the top four percent of America’s colleges and universities.

Advancements since then include construction of a co-ed residential facility, the launch of fully online undergraduate and graduate programs, alumni support topping 52 percent and the Molecular Research Center being designated a core research facility by the South Carolina Research Authority.

Tisdale’s career is sprinkled with accolades, including the Higher Education Leadership Foundation Award and South Carolina’s highest civilian award, the Order of the Palmetto.

He has served in numerous academic, civic and religious leadership positions locally, regionally and nationally, including on the board of the United Negro College Fund and UNCF’s Special Programs board of directors.

As a UNCF board member and chair of the member presidents, Lomax adds, Tisdale “helped shape the course not only of Claflin, but of all private HBCUs.”

Tisdale, whose last day is June 30, says he and his wife will begin “to enjoy some of the life we’ve missed over the last 25 years,” visiting family across the nation and traveling abroad.

Next year, he’ll write Claflin University: Vision, Risks and Collaborations, a book that documents the university’s progress over the last 25 years and that he hopes will help other schools.

Asked the best advice he would give someone entering a college presidency, Tisdale offers three tips.

“Take time to make certain that you know the institution, that you know the history, the achievements, the contributions, the culture, what’s in the DNA,” he says. “I think that is very, very important, because knowing that, then you should look to see what are the caveats of excellence you can build on.”

He also recommends “a cadre of mentors who understand leadership, especially leadership in higher education.”

Finally, Tisdale says, “don’t hesitate to reach out. There are many out there waiting and willing to be called upon to serve new presidents as they come into higher education.”