Washington, who is currently dean of the University of California, Irvine’s engineering school, will be the Virginia university’s first African American president. He will begin his new role on July 1.

He was drawn to the position because of George Mason University’s “reputation for having real impact, providing access and for its commitment to inclusive excellence,” Washington said in a statement. “I feel really blessed to have been given this opportunity and can’t wait to get started.”

The new president isn’t the only one who can’t wait. Julian Williams, George Mason University’s vice president of inclusion and diversity, heard his phone “blow up” with messages from faculty, staff and students after the announcement.

“This is just an awesome day for the institution,” he said. “Folks are excited.” 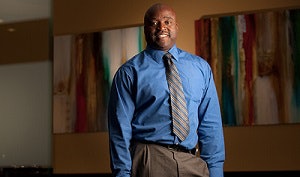 George Mason is one of the most diverse universities in Virginia, with a student body that’s 39% first-generation and 33% Pell-eligible.

Williams said he’s grateful for the model the president’s appointment sets across the institution. It encourages the entire university to seek out diverse applicant pools and make hires that “highlight and demonstrate your commitment to diversity and inclusion and your values,” he added.

In addition to Washington’s body of engineering research, with more than 150 publications, the new president comes to George Mason with a record of diversity and inclusion work.

At UC Irvine, he hired more than 60 new engineering professors, 40% of whom are women and underrepresented minorities. He also orchestrated an initiative to help community college students transfer to four-year institutions in Orange County.

His other accomplishments include increasing undergraduate and graduate enrollment at the engineering school; creating new programs with UC Irvine’s business school and school of humanities; establishing the OC STEM Initiative to improve K-12 STEM education; and leading the development of the Horiba Institute for Mobility and Connectivity.

In a statement, Dr. Enrique J. Lavernia, provost and executive vice chancellor of UC Irvine praised Washington for creating “a robust pipeline of future engineers” at the engineering school and called him a “collaborative and solutions-oriented leader.”

Based on Washington’s past work, Dr. Shannon Davis, search committee co-chair and faculty senate chair at George Mason University, is confident that the new president will be able to connect faculty and students across differences and disciplines.

She described him as an “excellent communicator” and a “creative thinker.”

Washington is “very comfortable working with people from diverse backgrounds, across intellectual diversity, and is able to bring them together to work toward a common goal,” she said.

“He found a pathway into higher education and he’s excelled in everything he’s done,” she said. “He is the Mason story. That’s the story many of our students live quietly.”

Meanwhile, the selection of the new president comes at a moment of introspection for the university.

In 2017, a team of professors and undergraduates started researching the more than 100 slaves owned by 18th-century Virginia lawmaker George Mason, whom the university is named after. This grew into the Enslaved Persons of George Mason Memorial Project, a plan to commemorate the people enslaved by Mason with a monument at the center of campus. The project was officially approved by the university’s Board of Visitors last year, and the memorial is expected to be built in 2021.

These two moments “colliding with each other” is “absolutely exciting,” said Integrative Studies Professor Dr. Wendi Manuel-Scott, one of the faculty members who spearheaded the memorial project.

She summarized her feelings about the announcement of the university’s first Black president in one word – “Wow.” To her, the decision sends a message:

“George Mason University is not this sleepy institution in Northern Virginia,” Manuel-Scott said.

“We are a premier research institution that doesn’t just talk about diversity, that doesn’t just talk about inclusion, but rather it really is who we are, from the way in which we think about space – creating a memorial to the enslaved people George Mason held – to the types of programs, majors and departments we have to support our students in their research and professional goals to naming the first African American president.”