Dr. Sharlene Sinegal-DeCuir graduated from Xavier University of Louisiana in 1999. At the time, the historically Black university in New Orleans offered an African American Studies minor, but no major. When she returned to the university as a faculty member, a civil rights historian, she wanted to give her students the course of study she never had.

Now she’s an associate professor of history, Keller Family Endowed Professor and department chair. And Xavier University is launching a new major program in African American and diasporic cultures studies, with the help of a $500,000 grant from the Andrew W. Mellon Foundation. Sinegal-DeCuir served as the principal investigator on the grant proposal. 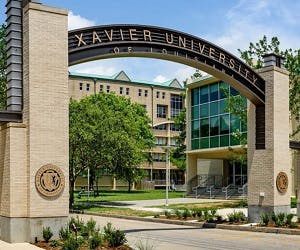 While Xavier University already has an African American Diaspora Studies minor and an Afro-Latin American and Caribbean Studies minor, scholars like Sinegal-DeCuir wanted to offer a program that took a holistic, global approach. An interdisciplinary team assembled around the idea: Dr. Shearon Roberts, assistant professor of mass communication; Dr. Elizabeth Manley, associate professor of history; and Dr. Carmen Cosme, assistant professor of Spanish. Together, the committee wrote up their proposal to the Andrew W. Mellon Foundation.

The new major program is “going to be different than what we teach now because it’s going to dive deeper into a lot of issues, and not just the issues that we face as African Americans but the issues globally that people of color are facing …” Sinegal-DeCuir said. “Some of [my students] don’t even realize there are Black Mexicans or Black Cubans and so on. We live in an American bubble. We need to be able to see outside of America and bring in all the other experiences.”

The latter feels particularly relevant as the COVID-19 pandemic continues.

Students will be able to explore contemporary questions like, “How are people in the medical industry treating people of color? We know in the global pandemic, in COVID-19, that African Americans are dying in higher numbers … What is the reason? Why? Why are we considered essential workers?” Sinegal-DeCuir said.

The announcement of the new program came on the heels of Black Lives Matter protests this summer. Its relevance to the current national moment wasn’t lost on Dr. Anne McCall, provost and senior vice president of academic affairs at Xavier University.

The timing “obviously coincides in sad ways, as well as in ways that offer hope, with new social justice movements,” she said.

But plans for the program predate the country’s reckoning with racism this year.

“We know that everything that’s come out this summer was already there,” McCall said. “The killings have been there. The profoundly unequal treatment has been there. The structural racism … it was there. The proposal had its intellectual and experiential underpinnings long before the events of this summer sparked such interest, or renewed interest.”

She’s proud that “we’re not Johnny-come-latelies,” she added. “We’ve been doing this since our foundation. [This program] is a contemporary approach that really keeps us at the forefront and on the edge of the new knowledge that needs to be created. We are a site – and we have been a site – of knowledge production on our racialized past and present and what we hope for in the future. So, that isn’t new. But we’re adding heft to our array of opportunities for students to learn.”

Of Xavier’s 3,300 students, 80% are Black. For them, she sees this program as an opportunity for “personal discovery, identity development and an ability to contextualize self within the world.” And for all students, she hopes it will equip them with the foundational knowledge they need for their continued activism.

“I’m counting on them to do better than we have done,” she said.

In that vein, Sinegal-DeCuir plans for the program to be solutions-oriented. She hopes students come away with not only knowledge but “compassion” for Black experiences around the world – and that they ultimately bring an empathetic, global lens to whatever professions they  choose post-college.

“We can’t solve the world’s problems …” she said, not in one major program anyway. “But we can at least talk about it and start those conversations and plant those little mustard seeds that our students can leave with, and [they’ll] continue to have the conversations later on in their lives, their careers.”