After Northwestern University student protests escalated Saturday, Evanston Mayor Steve Hagerty called on the school in a letter Sunday to reimburse the city for the police costs, the Chicago Tribune reported. 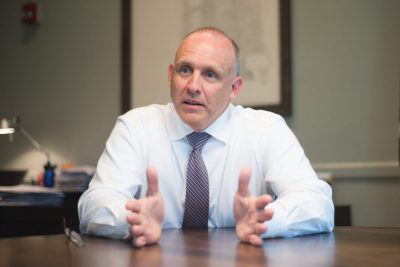 The protests are part of an effort by NU Community Not Cops, a student-led group pushing NU “to abolish or defund the campus police department and to sever ties with Evanston and Chicago agencies.”

Since many of the protests were off campus, the Evanston Police Department had mainly been tasked to handle them.

While the protests have been primarily peaceful,  a protest on Saturday of approximately 150 protesters led to one injured officer, pepper-sprayed protesters and multiple reports of property damage, according to officials.

According to police, they “charged a 20-year-old female student with misdemeanor battery, resisting arrest and using a fictitious and altered driver’s license after ‘she used her bike to strike an officer.’”

“While this 30-day protest is costing tens of thousands, if not hundreds of thousands of dollars, in overtime, which I anticipate NU will cover, I, like you, want to know that these protesters are safe,” Hagerty wrote. “It is always on my mind that the protester is someone’s child, and whether I agree or disagree with their efforts, they deserve to protest safely.”