Black students at the University of California Los Angeles (UCLA) have been calling for a Black Resource Center for more than five years. In June, UCLA announced that it would create the center, which is now in the planning stages.

“In this moment we rightfully have been moved to ask what more we can do to make UCLA a community where all will know that Black lives, Black intellects, Black aspirations and Black experiences matter,” wrote Chancellor Dr. Gene Block and Executive Vice Chancellor and Provost Dr. Emily Carter in a statement. “UCLA will provide funding this coming academic year to establish programs and staffing in the center. We have begun the process to identify the best location options for the Black Student Resource Center in the center of campus.”

For Black student activists, this is a success story, but it has also felt like a long-fought battle. 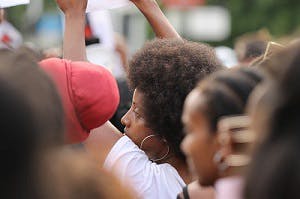 The Afrikan Student Union and the Black Graduate Student Association released a joint statement, calling the timing “eerily convenient,” in the aftermath of Black Lives Matter protests, but also a “major win” and “monumental” for the Black student community.

“Our fight is not done here and there’s so much more work to be done, but this space is a sign of how powerful the resilience and strength of our community at UCLA and as a whole is, and is a testament to the determination of our people,” the statement continued.

Dr. Tyrone C. Howard, a professor of education at UCLA, also described the moment as “bittersweet.” He directs the UCLA Pritzker Center for Strengthening Children & Families, the Center for the Transformation of Schools and the UCLA Black Male Institute.

He’s heartened watching leaders actively making plans to build and staff the center, but “the university didn’t feel compelled to do this because it was the right thing, because students have been pushing for this for many years,” he said. “I think the university ultimately felt moved to do this because the climate is such that, if they didn’t do it, it would look very bad. We can’t allow these kinds of moments, these tragic moments … to be our impetus for when we decide to do these things. I’m excited, I think the students are excited, but it had to happen under duress.”

The university’s decision to create the center came after a failed referendum in student government’s spring 2020 election, which would have funded the Black Resource Center through a $15 student fee per quarter, $45 throughout the year. The Cultivating Unity for Bruins (CUB) referendum garnered 49% of votes, according to the Daily Bruin. It needed 50% plus one vote to pass.

Naomi Riley, UCLA’s student body president, described the Black Resource Center as one of a list of action items passed down from Black graduates to Black students year after year.

In the absence of the university’s initial support, the goal was to create a “student-run, student-centered space” funded by students, where a variety of student clubs would have offices and storage, she said. It wouldn’t only serve Black student groups but also the Transfer Student Center and the Mother Organization Coalition, student groups that serve marginalized communities, including the Muslim Student Association, Queer Alliance, the Vietnamese Student Union and MECha.

For Black students, the demise of the referendum was “very difficult,” Riley said. It had a “strong impact on campus climate,” and, for her personally, it was disconcerting to be elected as an Afro-Latina woman while students simultaneously shot down funding the center.

Howard saw the impact that moment had on his students.

“Black students have oftentimes been at the forefront of pushing for better inclusion, recognition, opportunity, access – and these are like blows to the gut when you have another defeat, another setback, another challenge to your very presence on campus,” he said.

When the referendum was first introduced, the online meeting was Zoom bombed by someone who repeatedly typed a racial slur into the chat box. Comments about the referendum surfaced on Reddit that, to Riley, felt “microaggressive,” arguing that “students would mismanage money.”

“Really what you’re saying is students of color would mismanage money, and you wouldn’t trust them to be able to manage their own fees,” she said.

Riley is grateful to university leadership, but she also wants the campus community to not forget the student activism that made it happen.

University leaders “moved swiftly, I would say, which is one of the reasons why we questioned, if this was able to happen so quickly, why could it not happen five years ago or a year ago before Black students had to endure all they did with the CUB referendum?” she said.

She emphasized that space for student groups is “critical to building community, to retaining yourself on campus, to finding who you are,” particularly for students from historically marginalized communities who feel like campuses weren’t designed for them.

As an example, she referenced UCLA students’ push to rename Janss Steps, which honor Harold Janss and Edwin Janss Sr., brothers who sold the University of California the land to build UCLA but also used racial covenants to bar people of color from owning property in the surrounding area, according to the Daily Bruin.

Editor’s note: The Cultivating Unity for Bruins referendum needed 50% plus one vote to pass, not 66% as previously stated in the article.