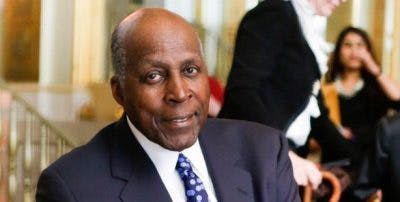 “He often told a story about spending his summers in college working as a chauffeur for Mr. Robert Maddox, a former Mayor and retired banker in Atlanta, GA, who owned a vast home library,” said Howard President Dr. Wayne A. I. Frederick. “Mr. Jordan spent his down time reading the books and when Maddox found out, he was shocked and begrudgingly gave him permission to continue reading. One night at the dinner table, Maddox proclaimed to his family, ‘Vernon can read!’ Mr. Jordan never forgot that experience and it became a pivotal moment in his vast narrative of triumph over controversy. Therefore, it is most fitting that we name one of Howard’s libraries in his honor.”

Positions Jordan has held include – but are not limited to – senior managing director of Lazard Frères & Co. LLC; senior executive partner with law firm Akin Gump Strauss Hauer & Feld LLP; president and CEO of the National Urban League, Inc.; executive director of the United Negro College Fund; and director of the Voter Education Project of the Southern Regional Council.