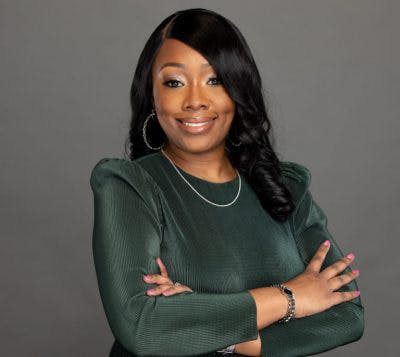 The two awards are the 2021 Distinguished Partnership Award for Community-Engaged Creative Activity and the 2021 Community Engagement Scholarship Award.

Baker-Bell’s work with Henderson-Hudson and Denby High School has centered on antiracist English Language teaching and scholarship, Baker-Bell said. She served as a guest instructor to Henderson-Hudson’s class.

And her partnership with Henderson-Hudson is based on the anti-racist teaching of Black language, which she highlights in her book, Linguistic Justice: Black Language, Literacy, Identity, Pedagogy.

“I am a Detroit native…born, raised, schooled, and I taught for years as a high school English Language Arts teacher,” Baker-Bell said. “I met Mimi Henderson-Hudson in 2003 at Detroit Academy of Arts and Sciences, where we taught ELA on the eastside of Detroit. Ms. Henderson-Hudson can attest that I was already involved in community-based teaching and learning way back then.”