On a recent afternoon, Dr. Zebulon Miletsky and a colleague were discussing whether or not they have the day off from work on Friday, June 18. She thought they did, and he didn’t know.

June 18 is the day before Juneteenth, which falls on a Saturday this year. If Juneteenth were a holiday like July 4, Miletsky, an associate professor of Africana studies at Stony Brook University, would know that he could make plans for a three-day weekend celebration.

“From what I can tell, the way Juneteenth is being implemented around the country is being done inconsistently,” he said.

And he’s right. Because Juneteenth isn’t a federal holiday, each state decides independently how or if they acknowledge the date. 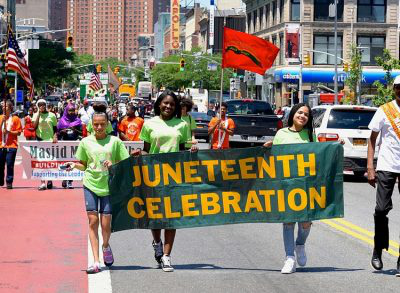 Universities responded with videos of athletes explaining what Juneteenth was; college presidents sent out official messaging, many giving a day off to mark the occasion. In March of this year, the University System of Maryland made Juneteenth an official holiday, giving all faculty, staff and students the day off.

On June 19, 1865, Union Soldiers under the helm of General Gordon Granger descended into Galveston, a small island on the Gulf Coast of Texas, near Houston. There they found over 250,000 persons still enslaved, despite the Emancipation Proclamation in 1863, and the passage of the Thirteenth Amendment in January of 1865. A decree was read, bringing an official end to slavery in the United States. Almost immediately after, celebrations and parties sprung up spontaneously throughout the United States, and the date became known as Juneteenth.

“Black people have a long tradition of marking and commemorating emancipation,” said Dr. Manisha Sinha, the Draper Chair in American History at the University of Connecticut and the author of The Slave Cause: A History of Abolition. “They really kept alive the struggle for emancipation. … And it got lost during the Jim Crow era except within Black communities.”

Official recognition started with Texas in 1980, followed by Florida and Oklahoma. Today, there are only three states remaining who have not made some form of public recognition: Hawaii, North Dakota, and South Dakota.

In Brookings, South Dakota, Alex Woods will be reporting to work as usual on next Friday. Woods is the retention advisor for African American Programs at South Dakota State University. In June 2020, after the murder of George Floyd, Woods began receiving phone calls from the community asking what was planned for Juneteenth. Up until that point, Brookings had never had an official Juneteenth celebration.

Woods found himself in an advisory role to the community, working to support their ideas while finding those teachable moments and identifying gaps in knowledge.

“People really wanted to come and learn,” he said.

This year, Brookings and SDSU are committing to their new tradition, building on their successes and lessons from 2020 and expanding on it by “making it into more of a celebration,” he added.

“The bigger focus has been just really explaining it, making people really understand, what is Juneteenth?” he said. “We’re talking about history. People want to say, ‘oh, it’s good or it’s bad—it’s history.’ It’s something that helps us understand where we’ve been,” he said.

Solomon Comissiong, president of the University of Maryland’s Black Faculty and Staff Association, said that he feels the events of last summer and the subsequent social action had a major impact on the university’s decision to make the holiday official on their calendar.

“I want to give a vast amount of credit to the people who have been protesting,” he said.

Comissiong, who is also assistant director of student involvement and public relations for the school’s Nyumburu Cultural Center, said that many of his students are unfamiliar with the darker sides of United States history. He often finds himself sharing the worse part of history with them for the very first time.

“We, as a nation, have to do a better job of comprehensibly covering the struggles of people of color—their achievements, but also their struggles,” he said. “It gives people context, to understand why things are the way they are now, and why there needs to be radical change.” 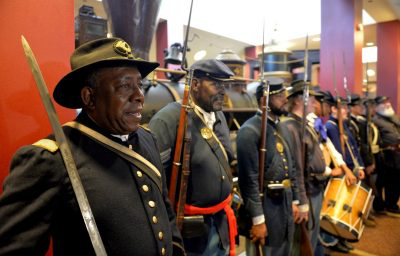 A 2014 Juneteenth celebration in Atlanta.

Steve Williams, president of the National Juneteenth Observance Foundation (NJOF) said that his foundation has been working feverishly to make Juneteenth a national holiday and bring it to the forefront of the national conversation since 1997. The organization has partnered with schools to promote awareness.

He said that the path toward a national holiday is often laborious, noting that it took 15 years of campaigning before Dr. Martin Luther King Jr. Day was finally signed into law by President Reagan in 1983.

Williams said that he knows better than to get his hopes too wound up over the latest push for federal legislation. Current resistance to the movement is vocally labeled as budgetary, but the backlash against The New York Times’ 1619 project and critical race theory, looms large in the backdrop.

Sinha notes that some people are frightened of the “new history” coming out—but “it’s not new,” she said. “It’s history.”

Miletsky ultimately discovered that he does, in fact, have the Friday before Juneteenth off. He’s been busy preparing educational videos for Stony Brook’s Juneteenth celebration, so the day off comes as a pleasant surprise.

“It is a holiday now, already, for a lot of people in their hearts—it has a full meaning,” he said. “And why not? We need that right now.”