Beacon College Leading the Way in Service of Learning Disabled 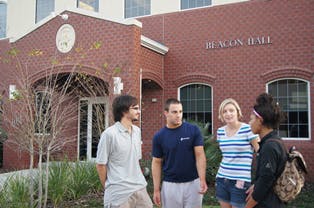 After trying out several colleges, Andrew Marvin found himself at Beacon College. Marvin, who has ADHD, says that Beacon was the only school that was able to meet his particular learning needs. The unique institution, located in Leesburg, Florida, is one of a handful of colleges that accept only learning disabled students.

Learning disabled (LD) students are pursuing postsecondary education in rapidly growing numbers. How colleges and universities will step up to meet the needs of these students, though, remains to be seen.

Meanwhile, Beacon College is on its way to perfecting an educational model that has proved to be successful for the diverse needs of its student body.

As a new freshman at the University of Southern Florida, Marvin stopped by the student disability department to meet his case worker and discuss his educational needs. His case worker greeted him in American Sign Language. ­The catch? Marvin is not deaf.

­That sort of miscommunication proved to be the theme of his year at USF and ultimately resulted in him leaving the university. Marvin says the mix-up was indicative of a generalized misunderstanding of learning disabilities at mainstream institutions of higher education.

“I don’t think [the case worker] had any ill intention,” Marvin says. “She had just done however many case loads she had that day, she could have mixed up my file, she could have confused what the particular nature of my needs was. It could have been a bunch of circumstances, but it didn’t set me up for success.”

In marked comparison, Beacon did set Marvin up for success. After graduating with a major in human services and a minor in psychology, Marvin is now the assistant director of admissions at Beacon.

Beacon has done the same for many of its students. ­The institution offers accredited bachelor’s and associates degrees and boasts a four-year graduation rate of 76 percent. After graduation, 83 percent go on to find employment or pursue further studies.

“An 83 percent employment rate in these very difficult economic times, I would match that against any liberal arts institution in the country except maybe the most prominent [such as] the Ivies and the tier just below the Ivies,” said Beacon president George J. Hagerty.

Beacon’s educational model is specialized to the needs of its small student body. In its early stages, 25 years ago, the college started out with 34 students. Currently, enrollment hovers at just under 200 students. “Our ultimate ambition is to go to 400 to 450 [students]. That would be appropriate for the size of an institution with this unique mission,” Hagerty says.

Class sizes are small, and students work with individualized learning specialists to help them develop their strengths and learn how to work around challenges. ­The university also offers courses on how to manage disabilities in the workplace, such as résumé training, training for phone interviews and learning what information to disclose to employers.

Current sophomore Michael Huey arrived at Beacon straight out of high school. He said that small class sizes were a welcome change compared to the large, impersonal classes he was accustomed to at his public school. “Everyone knows you and they’re very supportive. It’s a very family-like environment. It’s very easy to get involved and know all the professors and staff members,” he says.

­The close-knit nature of life at Beacon is intentional. “In a high-tech world, we realize that these students need high touch,” says Hagerty.

Though Beacon differs from mainstream institutions in many ways, one of the most distinct differences is that the school is aware of its students’ disabilities. At mainstream colleges and universities, students must advocate for themselves to let schools know about their learning challenges. Yet few do.

The National Longitudinal Transition Study-2 (NLTS2) offers one of the most comprehensive pictures of the educational outcomes of LD students in postsecondary education. The study followed more than 11,000 students for 10 years and was published in 2011.

According to NLTS2, many LD students do not actively seek out the supports they need to succeed in college.

Yet students who seek out academic support are more likely to persevere and graduate. “As a whole, students with disabilities definitely do better if they get help in college, even if it’s just going to writing centers, getting tutors and that kind of help,” Newman says.

Between 1990 and 2005, the rate of general population students going to college grew by 8.5 percentage points. In comparison, for LD students it grew by close to 20. In 1990, 26 percent of all LD students went on to some form of postsecondary education. As data gleaned from NLTS2 shows, by 2005 the rate was 45 percent. “The percentage has continued to grow since this comparison was done,” Newman says. “We saw growth in all types of schools.”

According to Hagerty, the problem of LD students failing to graduate is an “ethical” one. “Here’s the reality: If you admit a student, you should expect that that student can master the coursework and can graduate. Given that, you need to put into place, within reason, all of the supports that might be needed in class and out of class that will ensure that that student will prevail and get a degree in a reasonable time frame,” he says.

For LD students, the challenges do not stop once they complete postsecondary education. According to NLTS2, LD students are out-earned by their general population peers, making a mean hourly wage of $9.40, compared to $13.20.

The good news for LD students is that schools are required to level the playing field for them, though the approach varies from school to school. Yet even proactive students, as Andrew Marvin found, can find it difficult to navigate the bureaucracy for the support they individually need.

“As a student, something was eluding me,” he says. “Beacon became the choice. When you look at how students like myself learn, coming here made me love learning again.”