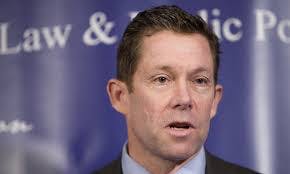 Judge Jeffrey Sutton and his appeals panel ruled that Morehead State’s actions weren’t based on Braden Frieder’s obscene gesture nor was it aware of his bipolar disorder when it made its tenure decision.

The evidence showed that Morehead denied tenure to Braden Frieder based solely on his “poor student ratings and disorganization,” the 6th Circuit Court of Appeals said in refusing to reinstate a retaliation and discrimination suit.

The university’s action wasn’t based on the fact that Frieder made an obscene gesture ― a “one-finger salute,” as Judge Jeffrey Sutton wrote ― in class, and it was unaware of his bipolar disorder when it made its tenure decision, the court said.

Frieder began a tenure-track position in 2006, it said, and had difficulty teaching, although he excelled at service and professional achievement. “The reviews of his introductory art history class were consistently abysmal,” and advice from his evaluators on how to improve “did not stick.”

The provost and president agreed with the evaluators’ vote against tenure.

The suit accused the university of wrongfully denying tenure based on his “idiosyncratic teaching methods” and argued that using his middle finger during a lesson about a painter who used birds to symbolize sexual sin in class was constitutionally protected speech.

A lower court judge tossed out the case.

The appeals court found no proof that his flipping “the bird” motivated the denial of tenure, saying, “While concerns about Frieder’s course reviews appear throughout the probationary evaluations, this one feature of his teaching style never makes an appearance.”

As for disability discrimination, it said Frieder produced no evidence that anybody involved in the tenure denial knew he’d been diagnosed with bipolar disorder.

The evaluators’ criticism of his lack of organization was not evidence that he was perceived as disabled, but merely perceived as ineffective at his job, it said.

A federal judge in Texas has rejected a disability discrimination suit by a former medical student who was withdrawn by the University of Texas Health Science Center at Houston.

U.S. District Judge Kenneth Hoyt said there was no proof that Jason Shurb was otherwise qualified to remain in the program after hospitalization or that the university failed to accommodate his visual learning disability.

When Shurb enrolled in 2009, he had obsessive compulsive disorder, severe anxiety, panic attacks, migraines and major depressive disorder, Hoyt said. The university let him participate in its Alternative Pathway Program so he could take two years to complete the first year of medical school.

In 2010, he took a medical leave of absence. After he returned in 2011, he was hospitalized, but the suit alleges the university demanded copies of his medical records, a note from his treating physician and psychiatric treatments. When he failed to fully comply, the university withdrew him.

He sued under the Americans with Disabilities Act, Rehabilitation Act and state law.

In dismissing the suit, Hoyt said the university had provided reasonable accommodation on request, including counseling by faculty members, admission to the Alternative Pathway program and a medical leave of absence so he wouldn’t flunk a gross anatomy course.

Hoyt also found no basis for Shurb’s claim that the university illegally retaliated against him by demanding repayment of a $5,000 Perkins loan.