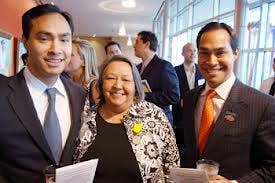 Rosie Castro says that education has always been the No. 1 way that her family has seen that people are able to lift themselves out of poverty.On the eve of her retirement as director of the Center for Academic Transitions at Alamo Community College in San Antonio, María del Rosario Castro, or just “Rosie Castro,” has not only helped underserved students navigate the often barrier-fraught landscape of academia, but she’s nurtured, trained and inspired two of the Democratic Party’s rising political stars, her identical-twin sons, Julian Castro and Joaquin Castro. Julian, the youngest mayor of a top 50 city, San Antonio, and Joaquin, a newly minted Texas congressman in the U.S. House of Representatives, spent their teen years accompanying mom to rallies and working campaigns. As a first-generation college graduate, an activist in the Raza Unida Party in the 1970s, a member of several boards, a community advocate and a leader in academia, Rosie set the bar high for her two sons, who both attended Stanford University and Harvard Law School, then returned home for a career in public service. Here the higher ed administrator turned famous political mom talks education and policy with Diverse.

Q: Your work in community development and empowerment inspired your sons to get into public service. How did community organizing inspire you to get into academia?

A: Education for the Castro family has always been the number one way that we’ve seen that people are able to lift themselves out of poverty. Without education — although it’s not impossible, but for the most part, for poor populations, populations of color — education is the way to be able to achieve not just a financial status, but housing, health care, all the things that come with the American dream. It has been one of the themes throughout my life. And so I have always, for year and years, I worked as a teacher. I’ve done a lot of substituting. When I was with the housing authority, I ran the education foundation that they had. When I was at HACU, I ran the training of the department. I have always volunteered with one of my alma maters — Our Lady of the Lake University. I was on some of their leadership boards and things like that.

Q: With Julian giving the keynote address at the Democratic National Convention last year and the election of Joaquin to the U.S. Congress, now both of your sons are in the national spotlight. Do you talk as a family about what they hope to do with their education policy?

A: Both of them have always understood that education is key and that it is critical to a human being’s success. And so you know, we have discussions, but they have their own ideas about education, spurred on by the fact that we cannot do without education. Julian as mayor, he has taken several education initiatives — one of the things he developed is Café College. There they have counselors that can help parents and students by giving them the resources, the training, everything they need to get into college. He was able to pass a tax for pre-K programs, which will allow many more kids in the city of San Antonio to receive pre-K, and that was after the state of Texas had actually pulled the money out of pre-K. And Joaquin was the co-chair of the Higher Education Committee while he was at the state house.

Education can’t be relegated to somebody else’s public policymaking. All of us have to do what we can to ensure that education is the number one priority in the city, the state and the nation. And that’s how they see it. With Joaquin, he has always concentrated on higher education. He has taken students from a poor districts like Edgewood here in town to visit several out-of-town colleges, and many other things. We recognize that it is so important because my mother, their grandmother, came from Mexico at the age of about six, and while she was here, she was only able to get a fourth-grade education. Despite that she was able to teach herself to read and write in Spanish and English, she would have liked to go to school more. She really stressed education to all of us. That is a foundation for us. And that is something we all preach to others and try to make sure that we are part of helping create resources in education.

Q: What’s been the most rewarding part of your work at Alamo Community College?

A: I think the most rewarding part is kind of dealing with the students. This past year, we were able to find some funding for a student ambassadors program. It gave us an opportunity to take them to the HACU conference in Washington, D.C. — so many of them have not seen D.C. They were able to see very professional people. They were able to talk to people about transferring. For me what is wonderful is to see people grow. We take students to college campuses and introduce them to new experiences and to watch that growth and to know that for them each step they take, each way that they grow is going to help them fulfill their ultimate dreams. So I enjoy working with the students and helping to ensure that they are making progress and that they are experiencing things that they didn’t have the opportunity to experience before. I think that’s where I have the most fun — providing the resources that get them to the next step.

Q: As you are about to close the chapter of your work as a higher ed administrator, what are some highlights of your work this year?

A: Right now we are in an interesting position here at the college. In December, we just got a new president and a new vice president. We’re about to get another VP. So we’re in a transition mode. We’re trying to maintain a lot of the good things we’re doing, but also helping bring in some of the new things that we’re trying. For example, our president has brought in a new group from California, called Puente, that helps Latinos and others to ensure that they continue semester after semester and that they transfer at the appropriate time. It includes a mentorship. It includes the linkage of a couple of courses. So we have these cohorts of students that are supporting each other, have mentors, are learning in these classes that are designed to help them out. This last semester was the first kind of report card, if you will, on their grades, and they did very well. For me, it’s been trying to look at what works with our population, trying to maintain some of the good work that has already started here with several departments, so there’s been a lot to stay on top of.

Q: How do you feel as a mom about the direction that your sons’ careers have taken?

A: Well, I am really proud of them. I am proud because they have a commitment to public service. They really want to make sure that our communities have opportunities that were denied for so long. I am just really grateful that they have turned out to be the kind of good public servants that they are. And that perhaps in the future, it will be blessed with the ability to do even more, depending on where they are in their own public service lives. We have fun. It’s harder now, because I don’t see them as often. I see Julian more because I babysit for my granddaughter. But Joaquin, you know, some weekends, he’s not able to come in. But we talk all the time. They have so many things on their plates that I think will make a big difference in the country.