And she’s eager to face those challenges, she said Monday to an audience of faculty, staff, trustees and other guests assembled in the college’s library. 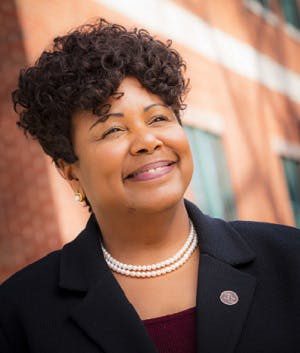 “I am filled with excitement when I think of the college’s future,” Evans said, noting that Bloomfield is the only predominantly Black institution (PBI) in New Jersey and also a Hispanic serving institution (HSI).

Paying homage to grandparents who raised her in Alabama and a grandmother who taught her the importance of higher education, Evans noted only about five percent of U.S. college and university presidents are women of color. She said she hopes to be a role model for students while promoting their success.

“My passion is student affairs,” she said, referencing years of experience as a counselor, professor and administrator. “That’s the reason why we’re here – their success.”

U.S. Rep. Donald M. Payne, Jr., whose Congressional district includes Bloomfield, lauded the college as one of New Jersey’s best and most diverse. In Evans, he told guests, the school has gained “an insightful leader with a deep commitment to inclusive excellence.”

Evans arrived at Bloomfield with experience in private counseling and 25 years in leadership roles at public and private universities, including 20 years at MSIs in San Antonio, Texas.

Most recently, she served as provost and vice president for academic affairs at Our Lady of the Lake University in San Antonio. Prior roles included dean at OLLU and associate dean and department chair at the University of Texas at San Antonio.

The author of numerous book chapters and articles about leadership, diversity, multiculturalism and women’s issues, she has made more than 100 presentations on those topics from state to international audiences. Her extensive global travel includes working with counselors and educators on literacy initiatives in Malawi with the United States Agency for International Development (USAID).

Dr. Richard A. Levao, who served as Bloomfield president for 16 years prior to Evans, praised his successor’s appointment.

“Her experience, dedication to our college’s mission, as well as her personal warmth, energy and compassion bodes well for the future of this college that so many of us love so well,” said Levao.

Bloomfield’s 150th anniversary is this year, and Evans pledged to take the college to new heights as “a national leader and role model for inclusive excellence” that provides diverse students access to an affordable education.

She cited points of distinction such as stellar game-design and nursing programs, and national ranking among schools with the best upward socioeconomic mobility for graduates.

Evans also spoke about supporting faculty and staff and helping the state legislature appreciate the importance of more support, including financial, toward the college’s mission.

In an interview after the news conference, Evans told Diverse that she transitioned her career from counseling to higher education, advancing up the ranks with the belief that she could make a significant impact as an administrator and ultimately a president.

When she learned that Bloomfield trustees had unanimously appointed her the college’s 17th president, she was filled with joy, gratitude, excitement and “a little fear,” she said.

But she shrugged off the fleeting specter of imposter syndrome, reminding herself that she had been preparing for such a moment.

Evans said her ability to connect and work with people, her desire to help them succeed and high expectations will help her succeed in her new role.

So, too, will her extensive counseling background, she said.

“I know how to listen to people, to read the verbals and nonverbals. I’m not afraid of confronting those, when people say one thing and do something different. And I’m not afraid to have that conversation in a way that is still collaborative.”

During the news conference, Evans said her 21 years of experience at MSIs and work with first-generation college students will be helpful as she engages a similar demographic on the Bloomfield campus.

“Embedded within the mission of Bloomfield College are the mandates: to provide access and to present opportunities that will better the lives of those who have been historically excluded from such chances,” she said. “And that is what we will continue to accomplish at Bloomfield College.”