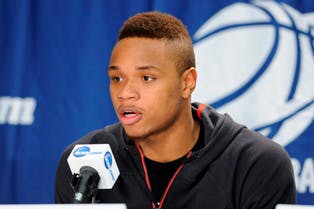 When Derrick Gordon decided last April to become the first openly gay player in Division I men’s college basketball to publicly come out, he wasn’t sure what kind of reaction he would receive.

“I didn’t want to hide anymore, says Gordon, who made the announcement back in April as a member of the University of Massachusetts men’s basketball team. “I didn’t want to have to lie or sneak. I’ve been waiting and watching wondering when a Division I player would come out, and finally I just said, ‘Why not me?’”

Now, a junior at UMASS, the New Jersey native who transferred from Western Kentucky University, where he played for the Hilltoppers, says that he made the right decision by deciding to come out of the closet.

In the months since his public disclosure, Gordon has become a symbolic face for the LGBT college movement and now follows in the tradition of several other high-profile professional athletes, including Michael Sam and Jason Collins, who also publicly acknowledged that they too were gay.

For Gordon, who is studying sociology, the experience has been fully liberating. After he broke the news earlier this year, students at UMASS quickly rallied to his side. That public embrace, he says, is an indication that college students are perhaps less willing to tolerate homophobia and bias against the LGBT community.

“Everyone has been very supportive,” says the soft-spoken Gordon in an interview with Diverse. “My professors told me that I was courageous for what I did. They gave me hugs and everything. It was great.”

Derek Kellogg, head coach of the men’s basketball team, says that Gordon’s decision to come out was courageous.

“We know his decision weighed heavily on him for some time, but as a coaching staff, a team and a family, we stressed to him that we support him in every way possible,” says Kellogg. “Derrick is a first-class representative of this University and this program since he joined us, and we are all very proud of him.”

Today, Gordon has become somewhat of a celebrity activist. He’s received hundreds of letters and e-mails from young people around the world asking for advice on how they too can begin the process of coming out.

“It’s interesting. Everywhere I go, I meet people who know who I am,” Gordon says with a chuckle, adding that he’s routinely stopped on the street and asked to take a photo and sign an autograph for a stranger. “It’s weird and fun at the same time, but I’m definitely a rookie at it.”

He’s been an honored guest at the GLADD awards in New York City and has since developed a stronger relationship with both Sams and Collins, who he says has helped him through the ordeal.

“It’s been better than I expected,” he says of his decision to come out. “It’s truly a blessing, because things could have been worse. I’m just happier since I came out, and I just hope things continue to get better for me on the court since I’m not hiding anymore.”

On the home front, Gordon initially had difficulty gaining the acceptance from some of his family members, including his twin brother and father. But today, their relationship, he say is not perfect but “tremendously better.”

“As time went on and I gave my brother space to think about it, he said ‘I’m going to support you no matter,’” Gordon recalls. “My father came around too. Everything is back to normal and that’s the way it should be.”

Gordon says that he does not fault members of his family for their initial reaction. “You can’t expect everyone to understand right away,” he says. “You have to give people time to heal and grow. This takes a lot of time and work.”

Now, he’s preparing for another season and hopes that his bold act will eventually encourage other college athletes to have the courage to come forward.

“I want a lot more gay athletes to come out and share their experiences,” he says. “But these things take time. They just don’t happen overnight.”