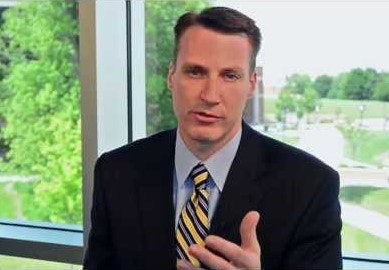 Cedarville University President Thomas White says, “God defined marriage, and no one except the Creator has the right to redefine it.”

When the Supreme Court made the decision to legalize same-sex marriage this summer, it shook many conservative Christian colleges to the core. The decision poses a moral challenge to schools with explicit policies banning same-sex relationships and dating. Other schools, such as Cedarville University, an evangelical Baptist school in Ohio, take it a step further and even prohibit public advocacy on behalf of the LGBTQ community.

Many such schools are in the process of deciding how to publicly affirm where they stand on the same-sex marriage issue.

Dr. Thomas White, Cedarville’s president, drew a clear line in the sand in a school chapel sermon on Sunday. Students returned to the Cedarville campus in mid-August. White said that he was saddened to see rainbow flags flown in celebration across the nation, rainbow lights illuminating the White House at night and rainbows on countless Facebook profiles. The rainbow is a symbol of pride among the LGBTQ community, but in Christian symbolism it has a different meaning, representing God’s covenant with Noah.

“God defined marriage, and no one except the Creator has the right to redefine it,” White said. “Therefore, as long as I serve as the president of Cedarville University, we will contend that marriage that God ordained marriage as one man and one woman in a covenant relationship for life, representing the Gospel union between Christ and the church.”

He described the Supreme Court decision as a “small skirmish” in a larger cosmic battle.

Cedarville and 120 other North American Christian colleges and universities are members of the Council for Christian Colleges and Universities (CCCU), a Washington, D.C.,-based advocacy group. Same-sex marriage is causing a rift among the CCCU’s member institutions. Some schools, like Cedarville, are doubling down on their policy of no tolerance for same-sex relationships, while two of the 123 member institutions have decided to show greater forbearance.

Eastern Mennonite University (EMU) and Goshen College announced on July 20 that they would allow the hiring of faculty and staff in same-sex relationships. The announcement came after four years of careful deliberation timed to coincide with the Mennonite church’s consideration of LGBTQ issues. Both schools are members of the Mennonite Church USA. Previously, LGBTQ faculty and staff could be hired so long as they agreed to remain celibate.

Goshen and EMU were transparent with the CCCU and its member institutions about their years-long process of discernment, but soon after their final decision was announced, other CCCU-member schools began to pressure the organization to immediately revoke Goshen and EMU’s membership. Union College in Tennessee dropped out of the CCCU in early August, with its president expressing frustration that the CCCU had not yet acted. Oklahoma Wesleyan University (OKWU) terminated its relationship with the organization on Monday, citing similar concerns.

“CCCU’s ambivalence in deciding the status of two member institutions that have advised CCCU they will permit same-sex couples to be employed as faculty members indicates to us that it is time for our university to move in a different direction,” OKWU president Dr. Everett Piper said in a statement on Sunday. “We believe in missional clarity and view the defense of the Biblical definition of marriage as an issue of critical importance to Christian colleges.”

The CCCU, for its part, originally said that it would undertake a six-month deliberation process to decide whether EMU and Goshen could become affiliate members, but updated its position Saturday on its website, saying that it will hold a members-only phone call on September 21 to discuss the school’s membership status.

Dr. David Olsen, chair of the communications department at California State University, Los Angeles and a Cedarville alumnus, likened the rift in the CCCU to the “realignment” the Episcopal Church underwent when it consecrated its first openly gay bishop in 2003. “It’s becoming a litmus test for them,” Olsen said.