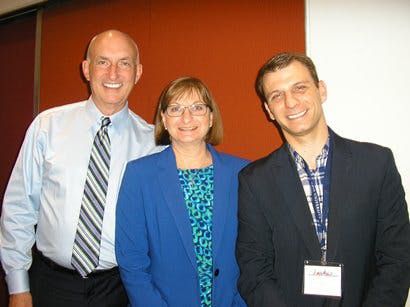 From left to right, Dr. James Gandre, president of the Manhattan School of Music, Jane Clementi and Sean Kosofsky, executive director of the Tyler Clementi Foundation.( Photo by Lois Elfman)

Scheduled to coincide with NYC Pride, LGBTQ Presidents in Higher Education held its second annual LGBTQ Leadership Institute where issues and strategies were discussed and networking was key.

Define your leadership goals. Discuss with a partner/spouse how involved he or she wants to be in your pursuit of a leadership position in higher education. Be aware that you may not get a job because you are gay or lesbian. Understand that you may be offered the job, but need to carefully consider whether or not to accept it given the college or university’s location or institutional culture.

“In the early 2000s, when I was dean at the University of California, Berkeley, it was pretty clear to me that there was a glass ceiling to the highest positions. The few that one knew about were really quite exceptional,” said Dr. Ralph J. Hexter, acting chancellor of UC Davis.

When Hexter became president of Hampshire College in 2005, it suited both he and the college to be open that he was gay. A couple of years later, he and other out presidents started getting together at various conferences they attended. They decided to formally organize when they realized their collective visibility would be beneficial to others.

Attendees at the Leadership Institute spanned a diverse range of positions in higher ed. The presidents in attendance met the day prior to the start of the conference to discuss challenges they’re currently facing — both LGBTQ issues and matters facing everyone in higher education leadership. On Friday and Saturday, the presidents headed up mentorship groups to discuss leadership pathways. The objective was for aspiring leaders to ask hard questions.

The groups were divided by the types of positions people currently hold. At the session for those already in senior positions, some questions were unrelated to LGBTQ issues. What additional education should someone interested in a presidency pursue? What jobs position someone to become a president? Others were LGBTQ specific, such as when in the recruitment process to come out.

Dr. James Gandre, president of the Manhattan School of Music, said he essentially outs himself in his CV, and if a head hunter didn’t pick up those references, he told them in the first conversation. In addition, something he learned during the job search process was to command the room and act presidential. Don’t dwell on how great you are at your current job. Rather, present yourself as prepared for the job for which you’re applying.

It is crucial that those interested in being college or university presidents do thorough research on the institutions they’re targeting. Also, read books, view webinars, attend workshops and ask questions about leadership.

Included among the afternoon events was a presentation by Jane Clementi, co-founder of the Tyler Clementi Foundation, and Sean Kosofsky, the foundation’s executive director. They discussed bullying, most notably cyberbullying, and what the foundation is doing to stop it. In 2010, Tyler Clementi, then an 18-year-old freshman at Rutgers University, committed suicide after his roommate taped him having sex with another man and broadcast it on the web.

“We first hope folks will keep Tyler’s story in mind when they’re trying to inform policy and practice on campus,” said Kosofsky. “We think folks should be doing things proactively — interventions like #Day1 — to send a message clearly and early on that harassment, bullying and humiliation are not going to be tolerated on these campuses.

“A good takeaway for us is when people leave touched by the story and ready to act.”

Among the topics at the afternoon breakout sessions was Navigating Transgender Issues in Higher Education, at which Dr. Pauline Park said it is imperative that colleges and universities be proactive in discussing transgender issues and developing specific and inclusive policies. Students, faculty and staff all need to be educated in a meaningful way.

Figure out inclusive policy that makes sense and communicate it to the public. Craft policy that articulates in a clear and concise manner that parents and alumni can understand. Bring in someone with expertise to write it.

“I know the best way to find the next opportunity as well as to grow my knowledge of higher ed is to listen and talk,” said Isaac Thweatt, director of alumni outreach at American University, who was invited to attend by one of the program planners. “I’m not sure what the pathway will look like, but I think at the end of the road is probably a presidency of an institution. This will help me navigate the plan to get there.”

There were a couple of academic search firms present at the conference willing to discuss with attendees about what goes on in a search process. There was also a celebratory and upbeat mood when it was announced that President Obama had declared Stonewall Inn the first LGBT national monument.