Editor’s Note: Diverse: Issues In Higher Education has announced the three distinguished 2018 recipients of the Dr. John Hope Franklin Award.  Dr. James J. Duderstadt is the second to be profiled  in a series that runs through Friday.

In 1968, as a postdoctoral fellow at the California Institute of Technology, Dr. James J. Duderstadt was asked to give a seminar at the University of Michigan.

While he was flying back home to Los Angeles, his wife, Anne, received a phone call from an executive administrator at the University of Michigan with an offer for a faculty position for him. She immediately and enthusiastically accepted the offer on Duderstadt’s behalf.

“I walked in the door and she said we’re moving to Michigan,” recalls Duderstadt. “And we’ve been here for 50 years.” 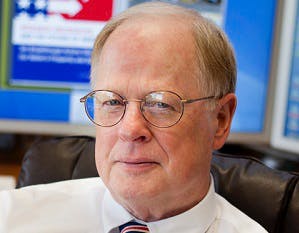 While he is known today as a pioneer of diversity and inclusion in higher education, Duderstadt started as an assistant professor of nuclear engineering and was promoted to full professor by 1976. Nuclear engineering at Michigan was then primarily a graduate program. However, the students were not much younger than Duderstadt himself, and as a young faculty member, he became receptive and attuned to their concerns.

“I regarded most of the students I was teaching as friends and colleagues, and we kind of learned together,” he says. “At the same time, I got interested in broader issues involving the university.”

The students at the University of Michigan had been involved in activism throughout the 20th century, engaging with issues such as the Vietnam War, the Black Power Movement and school desegregation. As Duderstadt transitioned from faculty to administration, he leveraged his camaraderie with students to support rather than fight this culture of activism on campus.

“I realized that although it often irritated the administration, student activism was really the social conscience of the university, which in turn affected the conscience of the nation,” Duderstadt says. “I decided that instead of fighting it and trying to push them off to the side, we would help them out.”

As he rose through the ranks as dean of the college of engineering and later vice president for academic affairs, he allowed students to sit on key university committees. In the 1980s and ’90s, students and faculty advocated for gender equality and LGBTQ rights. It was in the throes of these controversies that Duderstadt became president in 1988.

“I must say, they taught me a tremendous amount,” Duderstadt says. “I guess I got pulled into it by some very talented and concerned and, clearly on these issues, correct students.”

At the time, Duderstadt held a one-vote progressive majority on the Board of Governors, which allowed him to establish the President’s Advisory Committee on Women’s Issues and to pass policies like benefits for the LGBTQ community.

As soon as he became president, Duderstadt launched the Michigan Mandate, a strategic plan that, among other things, sought to recruit more faculty of color so that the composition of the university’s professoriate would reflect the demographics of the state and the country.

Duderstadt’s Michigan Mandate mobilized what essentially became a university-wide search party consisting of all the institution’s faculty. He announced that the president’s office would pay for any new faculty hires, encouraging professors across campus to recruit outstanding scholars of color in any area of specialization.

However, the president’s office lacked the funds to keep its end of the deal. So, instead of checks, Duderstadt wrote IOUs to each department. Then, at the end of the year, he totaled up the debt and sliced it off the university’s budget.

Duderstadt’s administration didn’t stop there. He promoted women and faculty of color into top leadership positions at the university. In 1989, he appointed Dr. Edie Goldenberg as the first dean of the College of Literature, Science, and the Arts.

By the end of Duderstadt’s presidency, about half of the vice presidents were African-American and about half were women. One of Duderstadt’s last actions before stepping down was to appoint Dr. Rhetaugh Dumas, who in 1981 became the first Black female dean at University of Michigan, as vice provost.

“Get the people on board, give them authority and power, and things will happen,” says Duderstadt. “In fact, the more diverse the university became, the higher quality our student body and our faculty became, so we made the case that diversity does lead to significant increase in quality.”

Dr. Lester Monts, the Arthur F. Thurnau Professor of Music and the former senior vice provost for academic affairs, was the last administrator appointed by Duderstadt. According to Monts, Duderstadt presented the university with a vision for leading higher education into the 21st century.

“The Michigan Mandate had a motto of ‘linking social diversity with academic excellence,’ and that became sort of the rallying call for many of us who wanted to move in that direction,” says Monts, recalling the dramatic rise in the number of underrepresented minority students and faculty of color. “You look back on that, and you see that Jim Duderstadt had a vital role in moving the university in the path of progress.”

Monts still sees Duderstadt nearly every day because his lab is in the Duderstadt Center, which was named after the former president and his wife in 1996.

Following his presidency, Duderstadt returned to the life of faculty. He is director of the university’s Millennium Project, where he continues to publish books on higher education policy.

Looking back, he believes the path to a more inclusive university has remained clear despite the changing cultural landscape.

“I think the key is that you have to stress the commitment to providing opportunity to diverse populations,” he says. “As long as that drives it, you can find a way to do things.”