A $2 million gift from the Berlanti Family Foundation will establish a dramatic writing professorship titled the Barbara Berlanti Professorship in Writing for the Screen and Stage at Northwestern University’s School of Communications. The endowed professorship intends to “significantly expand” the school’s writing programs by boosting teaching capacity and creating a curriculum that trains students to work across media and genres for diverse, global audiences.

The money is the largest gift to an organization the foundation has made to date. Founded by alumnus Greg Barlanti, a television and film writer, producer and director, and his husband Robbie Rogers, the foundation aims “to improve the lives of all LGBTQIA people and their straight allies through education, the arts, medicine and other social services.” Berlanti is the director behind the 2018 gay, teen romance film Love, Simon and popular series such as Riverdale and Dawson’s Creek. 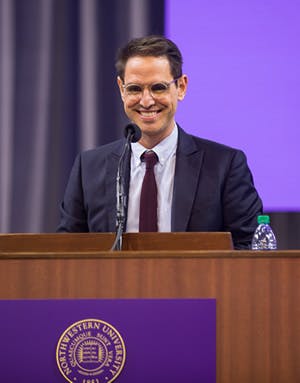 “Northwestern is determined to be at the forefront in finding and developing new voices and helping them tell their stories,” said Barbara O’Keefe, dean of the School of Communication. “… [The new professorship] will play a major role in helping us attract leading artist-educators to our faculty who can, in turn, recruit and nurture students from underrepresented and under-supported groups and help transform the creative industries.”