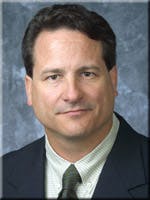 Dr. Kent Smith and the Office for the Advancement of Native Americans in Medicine and Science are reaching out to the 39 federally recognized tribes of Oklahoma.

The newly created Office for the Advancement of Native Americans in Medicine and Science, headed up by Dr. Kent Smith, professor of anatomy, is reaching out to the 39 federally recognized tribes of Oklahoma.

Yet of those that do graduate, only a tiny fraction go into STEM.

“One of the downfalls to the lack of Native Americans in the STEM fields and medicine is they’ve had no mentors growing up who are physicians or scientists, who can say ‘Hey, this is what I’m doing, here’s the path I took, you might consider it,’” Smith said.

Compounding the problem of a lack of Native Americans in STEM and medical fields is Oklahoma’s overall shortage of doctors and medical health professionals, particularly in rural areas.

Dr. William J. Pettit, interim senior associate dean of academic affairs at the OSU-CHS College of Osteopathy, attributes the lack of health care professionals going into the rural track to a “misunderstanding of what ‘rural’ is.”

Students, he said, fear the reputed isolation of the rural areas and are concerned about being unable to pay back sizable debts from medical school by working in sparsely populated areas. “Yet we’ve done studies that show that the rural practice really can be quite profitable, and really equivalent if not better than some of the urban counterparts for just coming out of school,” Pettit said.

In terms of isolation, Pettit said that rural health care professionals tend to be more immersed in the community. “You’re more likely to know everybody in a family in a rural setting,” Pettit said. “When you go to a local grocery store you’re probably going to see your patients as opposed to Tulsa and Oklahoma City where you may not see your patient other than in the office.”

Misconceptions aside, Oklahoma has been working to address its health deficits for the past several decades. In fact, the Center for Health Sciences was founded in 1972 with the mission to bring more physicians and health care professionals into rural practices. Even so, Oklahoma still trails behind most of the nation at 76 doctors per 100,000 residents, according to the Association of American Medical Colleges.

“Today, if we were able to, it would take us some 1,300 doctors to just come up to the national average,” Pettit said.

Pettit says he hopes that Smith’s efforts will have a dual effect. By inspiring more Native Americans to go into the STEM fields, Oklahoma may be able to find a source of health care professionals willing to live and work in rural areas, where so many tribal communities are located.

“His focus is to travel throughout the state of Oklahoma, to all the tribes within our state and encourage young men and women, tribal members, to consider science and medicine,” Pettit said of Smith. “That goes right along with the other part of the mission: finding folks from rural or tribal nations that we hope will get involved in the rural mission and then return to those areas to provide care.”

Before promoting the creation of the Office at OSU-CHS, Smith started up the Native Explorers program, which introduces Native adults to the wide array of career opportunities that STEM affords by bringing them on two-week expeditions to active paleontological field sites. The program has worked with 50 students since its beginnings in 2010.

Building off of Native Explorers, Smith started up summer STEM mini-camps for K-12 students in rural parts of the state. “The kids didn’t have to be Native American to participate,” said Linsea Howard, an OSU sophomore who volunteered with the camps this summer. Howard was one of the three second-year medical students of Native heritage who presented the mini-camps.

“It’s good that they started this office, to start reaching out to kids before they’ve gotten in to college, to get them interested in [STEM],” Howard said. “I think as it grows and after it’s been around for a little bit longer, and it’s gotten more support I think it’ll be able to do a lot more, and hopefully reach all of the tribes.”

Establishing channels of communication and collaboration with the education and health offices of all 39 tribes is one of the office’s primary goals. “Now that we have an office, we’ve got to reach out in my opinion equally and unilaterally to all the federally recognized tribes in Oklahoma,” Smith said. “[We want to] build on those relationships, let them know what programs we have, what we can do to help, and learn what they have and what their needs and wishes are.”

Rafe Coker, a second- year medical students at OSU and STEM mini-camp volunteer, said he is considering going into a rural practice once he graduates. “I’m not on the rural track, but I’m definitely heavily invested in rural Oklahoma, and I would like to go back and practice there. I’m pretty sure that’s where I’ll end up when all’s said and done.”