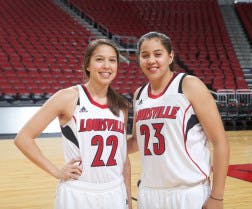 On the playing fields and hardwood floors across the country, Native American athletes who are excelling in sports are illustrating the possibility of higher education to Native communities.

“Sport can be a catalyst to drive many positive things in communities across the U.S. and Canada,” says Sam McCracken, chairman of the Nike N7 Fund, which brings sports to Native American and Aboriginal communities in the United States and Canada.­

“Our athletes exemplify that positiveness of what sport can do,” says McCracken, a member of the Fort Peck Sioux Tribe. “That’s where our ambassadors can play a uniquely positive role in inspiring kids to achieve things they didn’t believe they could.”

One such player is making a name for herself as a Native American athlete. Over the summer, basketball player Jude Schimmel, who is now in her fourth year at the University of Louisville, had more than a dozen speaking engagements with Native American tribes around the United States.

Jude’s story, and that of her older sister, Shoni, were documented in the 2011 film Off the Rez, which depicted their parents’ decision to move the family off the Umatilla Indian Reservation in eastern Oregon to Portland so the girls could attend a public high school and have greater exposure to college scouts.

“The fact that I was able to make it off the [reservation] and go to college and get an education … by setting that example, leading by example, I feel like that’s inspiration,” says Jude, who completed her bachelor’s degree in three years and is pursuing a master’s degree this year.

“People ask me all the time, ‘What does it take to get where you are?’ I take the time to try and explain to them and help them to the best of my ability.”

Shoni and Jude aren’t the first Native Americans to have the opportunity to receive a college athletic scholarship nor the first to succeed, but they are among a select few. Jude notes that some have had the chance, but haven’t seen it through, and she’s intent on helping change that. Jude says she is often asked how she does so well in school.

“I’ve been trying to be a great student since I was a young kid,” Jude says. “I’ve been along a path where I know how to deal with the adversity of school. Whether it’s hard or whether it’s easy, I try and do my best.”

The student part of student-athlete didn’t come as naturally to Shoni, but their parents tried to keep her on the right path. She embraced academics at the University of Louisville, where she also helped her team reach the national championship game in 2013.

During her four years at Louisville, Shoni says she learned the impact she had. An episode of HBO’s Real Sports showed that some Native Americans traveled great distances to see her play.

“It’s awesome to hear their stories,” says Shoni, now playing with the Atlanta Dream of the WNBA. “It’s a special moment to share with someone who’s traveled so far and looked up to you.”

While her road to college came via sports, Shoni is quick to tell other Native Americans that sport isn’t the only route. Whether they dream of being doctors, lawyers or artists, it’s within their grasp.

“There are plenty of different ways you can go,” Shoni says. “There are options. Don’t be closed-minded about things.”

McCracken says, “The right athletes provide a positive persona of achievement. I think that’s one of the things, especially in our tribal communities—seeing folks be able to aspire and follow their vision, their dreams or their passions.”

Among the Nike N7 Fund ambassadors—athletes who make appearances at Native communities in the United States and Canada—are representatives from a diverse range of sports. Among them is Sam Bradford of the St. Louis Rams (currently out for the season with a torn ACL), the winner of the Heisman Trophy in 2008 during his sophomore year at the University of Oklahoma, who is of Cherokee descent.

McCracken also mentioned professional golfer Notah Begay III, who grew up playing on public golf courses and went on to play for and graduate from Stanford University.

“When he talks to our kids, the kids see hope that they can do the same as well,” says McCracken. “The athletes play such a positive and strong role when they share their personal stories. Those personal stories are very similar to the people they’re talking with.”

Perhaps none more so than basketball player Tahnee Robinson, another Nike N7 Fund ambassador and a graduate of the University of Nevada, Reno. She grew up on the Wind River Reservation in Fort Washakie, Wyoming, where her family still lives.

A gifted player, she accepted an athletic scholarship to the University of Wyoming, but left school during her freshman year after becoming pregnant with her son, Julius.

Knowing she wanted to build a good life for her son, Robinson says she understood she needed to pursue higher education.

The coach at Sheridan College, a community college in northern Wyoming, recruited her when she was pregnant. She started school not long after giving birth.

“My first year in college at Sheridan I was a teen mom,” she says. “My first year was definitely a struggle. I definitely wasn’t the same basketball player that I used to be. That was the biggest struggle because I’ve always been good at basketball.”

Still, she managed to do well in the classroom and excel on the court. Robinson caught the attention of Jane Albright, head women’s basketball coach at the University of Nevada, Reno. Initially resistant to Albright’s recruitment efforts, she finally met Albright for dinner and shared her story, which left Albright both floored and inspired to help Robinson realize her dreams.

“Tahnee told me she wanted to be the best basketball player that ever played at Nevada,” Albright says. Albright told Robinson she had to make changes to her sometimes self-destructive behavior in order to achieve her goals. Albright also made it clear that Robinson had to not just attend college, but earn her degree, to have meaningful impact on Native Americans.

“When she was playing, it was so inspirational,” says Albright. “Every place we played, Native Americans would come. After the games—whether we won or lost—Tahnee would be talking to these Native American kids. Usually, their mothers brought them.

Since graduating from Nevada in 2011, Robinson has played professionally overseas in Israel, Bulgaria, Ukraine and China. This season, she is playing in Poland. When she’s home in Wyoming, she not only makes appearances for the Nike N7 Fund, but also holds her own basketball camps, where she speaks about the importance of school. She also tells parents to be supportive of their kids’ dreams, stressing that parental support is crucial in turning dreams into reality.

“My message now isn’t, ‘I’ve done it, so you can do it too.’ It’s, ‘These are my examples of how I’ve struggled, how I overcame it. Don’t try to be me. Try to be better than me. Try to be the best you that you can possibly be. Make your own path,’” says Robinson.

“We’ve created that path for these younger kids to obviously follow and to get inspiration from, but they can become better than us, so that there are more Natives and Native kids who get more inspiration,” she adds. “Hopefully, in a decade there’s not just a few of us.”