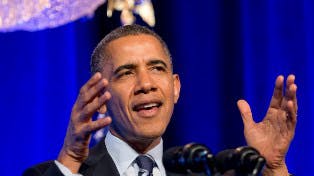 President ObamaWhen President Barack Obama visited the Standing Rock Sioux Reservation in June of this year, he and the First Lady met privately with a group of Lakota teenagers. President Obama described how moved he was by the candid conversation they shared about the challenges the young people faced growing up watching family and loved ones grapple with poverty, suicide, addictions to drugs and alcohol, and violence.

“There were tears in that room, pretty much the entire conversation. They sensed that schools weren’t
always preparing them properly. That they weren’t sure about the possibilities of a better future,” Obama said.

Speaking at the 2014 White House Tribal Nations Conference, Obama described that visit as the catalyst for a number of new policies he hopes to see enacted to better the current educational and economic outcomes of all tribal nations in the U.S.

The White House Tribal Nations Conference, which met for its sixth consecutive year, brings together representatives from the 556 federally recognized tribes with senior federal administrators in Washington.

Central to Obama’s goal is education. The White House 2014 Native Youth Report, released on Wednesday, finds that Native youth and Native education “are in a state of emergency.”

Data paint a bleak picture: 22 percent of American Indians and Alaska Natives (AIAN) ages 25 and older have not finished high school, and only 13 percent have a bachelor’s degree, according to the findings for 2008 from the National Center for Education Statistics.

While most students attend public schools administered by the state, 8 percent of AIAN students ― about 41,600 youth ― go to federally-funded Bureau of Indian Education (BIE) schools, located on 63 tribal reservations.

The Department of the Interior (DOI), which oversees the BIE, published a “Blueprint for Reform” for the 183 tribal schools under their care this past June. The Blueprint found that 34 percent of schools were in a “poor” condition ― and that an estimated $967 million is needed in repairs to bring them up to standard. Another 60 percent of BIE-funded schools do not have adequate digital bandwidth or even computers to meet the needs of contemporary assessments and other school activities.

“The Bureau of Indian Education schools, those that we fund, are historically some of the lowest performing schools in the nation,” said Sally Jewell, Secretary of the Interior, in a press call on Tuesday. “It’s very clear that the status quo is not acceptable.”

“The budget I submit to Congress in February will include smarter, stronger investments in several areas that are really important to Native youth, especially education. We’re going to invest in connecting tribal schools to high-speed Internet. We’re going to fill them with the best teachers and principals,” he said.

Yet Jewell said in Tuesday’s press call that she is not banking on getting all the requested funding from Congress. “If we end up with a [continuing resolution], we won’t have materially different support than what we have right now. We are committed to making the dollars that we have go further than they have in the past,” she said.

“I don’t think that the solution is just doing nothing and waiting for Congress to act on the budget,” Jewell said.

While much of the focus was on BIE schools and K-12 programming, some mention was made of tribal colleges and universities (TCUs), which, like BIE schools, tend to struggle with issues of funding and attracting teachers and administrators. Secretary of Education Arne Duncan praised the work TCUs do.

“They just do an extraordinary job, often on a shoestring budget, in what they are doing to transform lives to empower the next generation of leaders in a whole host of fields, including our future educators,” Duncan said.

Obama announced the launch of Generation Indigenous, an initiative designed to better prepare Native youth for college and a career, on Wednesday. “Nothing gets me angrier than when I get a sense that our young people early in life are already feeling like opportunities are foreclosed to them ― because that’s not who we are,” he said.