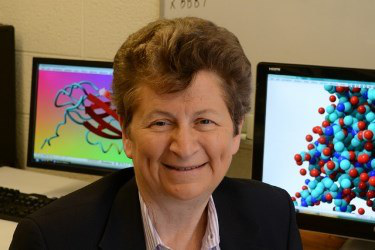 Dr. Mary Jo Ondrechen, a member of the Mohawk Nation, is a professor of chemistry and chemical biology at Northeastern University. She says the odds were stacked against her achieving.

The Society for Advancement of Chicanos/Hispanics and Native Americans in Science (SACNAS) gathers scholars and industry leaders in STEM for an annual conference of networking and community building. This year, SACNAS explored the unique challenges that women face in the STEM arena at a lunch panel at National Harbor in Maryland on Friday.

In her introductory remarks at the start of the panel, Ondrechen commented, “Probability says I shouldn’t be here.” Ondrechen, a member of the Mohawk Nation, was alluding to the small number of Native Americans in the STEM fields.

Hispanics and American Indian and Alaska Natives are highly underrepresented in the STEM disciplines. According to the National Science Foundation, a total of 35,360 STEM doctoral degrees were awarded in the U.S. in 2012. Of those degrees, only 4 percent were awarded to Hispanics, and only .3 percent was awarded to American Indian and Alaska Natives.

Ondrechen said she overcame an imperfect education in K-12 to get to where she is today. She described her public school system as the sort “where you don’t learn much.” Despite the circumstances, Ondrechen’s talent shone through, and she was offered a scholarship to Reed College in Portland, Oregon.

” I was hopelessly behind everybody else, but I was too naive to understand that I was so far behind,” Ondrechen said.

After graduating from Reed in 1974, Ondrechen obtained a Ph.D. from Northwestern University in 1978. She attributed her success in part to her mother’s encouragement. According to Ondrechen, she always “told me I could do anything I wanted if I worked at it.” She said she also had the “teachings of [her] elders” to guide her.

The takeaway from the panel, and from the overarching themes of the conference, was that the success of an individual requires hard work and commitment as well as a strong network and dedicated advocates.

“What [underrepresented populations and first generation students] really need is a road map. Somebody to tell them, this is how it’s done, this is what you’re getting yourself into, this is how you maneuver in that world,”  said Dr. Sonia Zarate, director of the office of undergraduate research at the University of San Diego and a SACNAS board member. “Without that knowledge, you’re always wondering what the rules are.”

Zarate’s academic career underscores the importance of mentorship. She is a first-generation college student. Her parents came to the U.S. to work in agriculture with the Braceros program and never had a chance to go to college. “They really felt that school was the way to go, the ticket out,” Zarate said.

They encouraged Zarate to pursue an undergraduate degree, but the possibility of going to graduate school never crossed her mind until one of her professors pulled her aside and asked what she planned to do after graduation. “I didn’t have an answer. I didn’t know. I was thinking in my head, ‘Are you kidding me, I’m just trying to do my best here!’” Zarate said. “I didn’t know I was supposed to be thinking about the next step. I just knew that I liked biology.”

The same professor invited Zarate to take part in a summer research program that also brought her to the SACNAS conference in 1998. The conference opened up her eyes to the possibilities of an academic career and provided her with a network of mentors.

SACNAS has grown considerably since 1998—this year the event drew more than 3,000 participants—but the core mission of building the pipeline to bring more minorities and diversity into STEM is the same.

For students who are just starting out in their academic career, it can be eye-opening to be introduced to a community of scholars with backgrounds similar to their own.

“I wouldn’t be applying to Ph.D. programs if it weren’t for SACNAS and the McNair program,” said Geena Ildefonso, a senior and McNair scholar at the University of Central Florida. “Neither of my parents went to college, so seeing other first-generation people and underrepresented minorities with different backgrounds [here] is really inspiring.”

Ildefonso has attended the conference for the past two years and is in the process of applying to computational biology Ph.D. programs. She is part of the UCF SACNAS chapter, along with another SACNAS 2015 attendee, Shantal Tummings.

Tummings is also a senior at UCF and hopes to move on to an environmental engineering doctoral program next year. Her interest in engineering came from growing up in Jamaica and experiencing the island’s periodic water shortages.

“When I immigrated to America I wanted to be part of the change of helping people in developing countries have access to water. Not necessarily on Jamaica, but wherever there is a need,” Tummings said. “That’s how I got interested in STEM and science.”

Zarate said that the mentorship and relationship building that results out of attending the conference or being a part of a SACNAS chapter are crucial to the organization’s goals of increasing representation within STEM fields. Faculty advisers and peer mentors are key to showing aspiring scholars the way.

“There are very few women in [fields like] engineering and computer science. The culture is one of having to ‘extra prove’ yourself,” Zarate said. “That’s a difficult thing.”