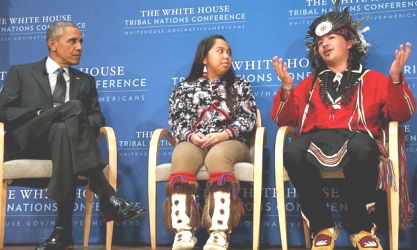 President Barack Obama engages in conversation with Tatiana Ticknor of Alaska and Brayden White of the St. Regis Mohawk Tribe.

At the 7th annual Tribal Nations Conference, President Barack Obama changed the script. Instead of standing behind a podium to address the assembled leaders of the nation’s 567 federally recognized tribes, as he has done in years past, he spent most of his time on stage seated and in conversation with five high school and college age American Indian youth.

Throughout his administration, Obama has shown a degree of interest in tribal communities that sets him apart from the presidents that precede him. Most recently, he traveled to native lands in Alaska, and visited Standing Rock Sioux Reservation with First Lady Michelle Obama in June 2014.

Prior to Obama, the most recent sitting president to appear in tribal lands was Clinton, in 2000 at Shiprock and 1999 at Pine Ridge. Before him, the last president to make an official visit to Indian country was Franklin Roosevelt.

The Tribal Nations Conference is the result of what the White House characterizes as a goal of strengthening the “nation to nation” relationship between sovereign tribes and the president. Under the Obama administration, the Tribal Nations Conference has brought the leaders of the federally recognized tribes to Washington each year for the past seven years. The last time a president held such a gathering was Clinton, in 1994.

“[Obama’s interest in tribal communities] has been more than lip service. There have been actual things put into place through his administration,” Glen Gobin, vice chairman of the Tulalip Tribes of Washington State, told Diverse.

In a number of the policies he has promoted, and during his official visits to Indian country such as the one to Standing Rock, Obama has consistently expressed a desire to improve the educational opportunities available to Native American and Alaska Native youth. His message was no different at the Tribal Nations Conference in Washington, D.C., on Thursday.

Obama said that the key to a middle–class life in the modern world is a good education. “There was a time where, as long as you were willing to work hard, you could support a family without a college education, or some sort of advanced schooling beyond high school. It is very hard to do now. … It doesn’t necessarily have to be a four–year college, but you need some advanced training,” he said.

What the federal government needs to do for Native youth, Obama said, is a better job of making them aware of what’s “already there” in terms of resources to pay for college. No student should be prevented from pursuing a postsecondary degree due to financial constraints, Obama said, when Pell Grants, scholarships, and federal loans are available. Tribal colleges were another resource he cited, calling them an “important bridge” for students who want to stay close to their community while working toward a degree.

Obama also spoke about the importance of cultural values, saying that he had asked Secretary of the Interior Sally Jewell to see that the curriculum of schools under the DOI’s jurisdiction is revamped to include more input from tribal communities. The DOI, under the umbrella of the Bureau of Indian Education, manages 183 schools that serve 8 percent of all Native youth. Obama as led an effort to push forward reforms of BIE schools, which had a graduation rate of 53 percent in 2011-2012.

The president also criticized the continued use of Native American mascots by sports teams, saying that it leads to a sense of alienation for Native students.

Some Native youth are striving to succeed despite growing up with limited access to resources that many would take for granted in the United States. Blossom Johnson of the Navajo Nation told Obama that, although she is an Obama Scholar at Arizona State University, when she goes back to the reservation on school breaks, she returns to a family home that has no running water or electricity. According to the Pew Research Center, one in four American Indians and Alaska Natives were living in poverty in 2012.

Obama attributed the poverty in Native communities on reservation lands to decades of dysfunction within the Bureau of Indian Affairs, the government agency that is tasked with managing Native American lands. “A lot of this, traditionally, has been run through the Bureau,” he said. “Let’s face it, for decades, it was underfunded, it was oftentimes not well managed, it was kind of an afterthought.”

Kerry Holton, president of the Delaware Nation, told Diverse that most of the students in his tribal community go to a local public school, as opposed to the BIE–funded Riverside Indian School that sits on tribal lands in Anadarko, Oklahoma. He said that there had been a “shift” in how the local public school system approaches teaching Native youth in recent years. “I think people woke up to the fact that there’s a lot of native students here; we need to be more sensitive and teach in a way that’s going to be better for them,” he said.

In terms of how Obama’s leadership had impacted tribal communities, Holton said that now there was a relationship, whereas previously there had been little to no interaction between tribal nations and the White House. “I think a lot of people … look at American society as a whole and they miss what he’s done in Indian country,” Holton said. “He’s made the difference.”